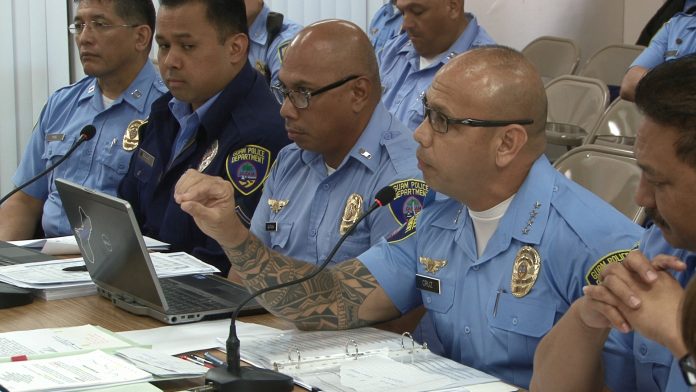 GPD is asking for $40 million for FY17, but Senator Michael San Nicolas is questioning whether the department will actually need more.

Guam – Things got a little heated during budget talks for the Guam Police Department today.

Last year when the Guam Police Department came to the Legislature for their FY 2016 budget, they asked for about $40.5 million but they only got $35 million. GPD Chief JI Cruz says they are now operating with a $5.5 million shortfall.

Today, in anticipation of their FY 2017 budget, they are asking for about the same amount $40 million, which is actually just slightly less than what they asked for last fiscal year. Senator Michael San Nicolas grilled GPD on the budget request, pointing out the disparity in the amounts.

“So it looks to me that, I mean just adding that $5.5 million in, you’re going to actually need $45 million,” said San Nicolas.

“No. If you add the $5.5 million to the $35 million that we were appropriated, it puts us in the same ball park for the monies that we’re asking for this year,” pointed out Chief Cruz.

“So if you’re going to need $5 million to cover 2016, then that means that we’re going to have, in 2017, a $5 million prior year obligation outstanding,” noted San Nicolas.

“That’s not what we’re saying. What we’re saying is for 2017 if you give us $40 million we can operate that fiscal year, not barring anything else,” Chief Cruz said.

“When it’s all said and done, I’m not worried about the $5 million here, there or anywhere, because the Guam Police Department will continue to be judicious in the use of its monies. We’ll figure out how to serve and protect our people and keep our community safe based on the monies that you appropriate for us,” he added. “So I’m not gonna squabble over what monies we thought we had, that we didn’t have. All I’m saying is, for the upcoming fiscal year, here’s what I’m asking for. We get what we get. We’ll make it happen. At the end of the day.”

Chief Cruz then slammed the committee for their lack of support in appropriating funding for GPD overtime. But Vice Speaker BJ Cruz fired back pointing out that GPD was given the administrative authority to set aside funds for overtime.

“In the FY 16 budget proposal we asked for over $1 million in the fy 16 budget proposal. Do you know how much money this legislative body gave us in overtime? Zero,” argued Chief Cruz, holding up his hand into the shape of a zero.
“But yet we managed to figure it out. How is that possible? How do we work overtime for monies that were never even appropriated to us.”

“We gave GPD a lump sum for the entire amount. We didn’t break it down. If you want us to break it down, we will. But the thing is, is that please, quit holding it up like this a zero because it wasn’t zero,” Vice Speaker Cruz answered back. “The comparisons are unfair because we didn’t line item last year.”