Lt. Paulino states that Tony “sustained multiple stab wounds throughout his body.” He was pronounced dead Sunday night at GMH.

The stabbing occurred Sunday night inside Apartment A-24 at the Pacific Garden Apartments in Dededo.

An autopsy was performed Monday afternoon, but Medical Examiner Dr. Aurileo Espinola declined to released details saying police asked him to keep the results confidential because the death is the subject of an ongoing criminal investigation.

Yesterday, Monday, 24 year old Marvin Sani of Latte Heights was booked and confined on charges of Murder and Use of a Deadly Weapon in connection with the stabbing death.

Lt. Paulino said that Sani turned himself into police Monday afternoon, accompanied by his mother.

Lt. Paulino also said that the occupants of  the apartment where the stabbing occurred positively identified Sani as the person who attacked Tony and he that Sani confessed to the crime. 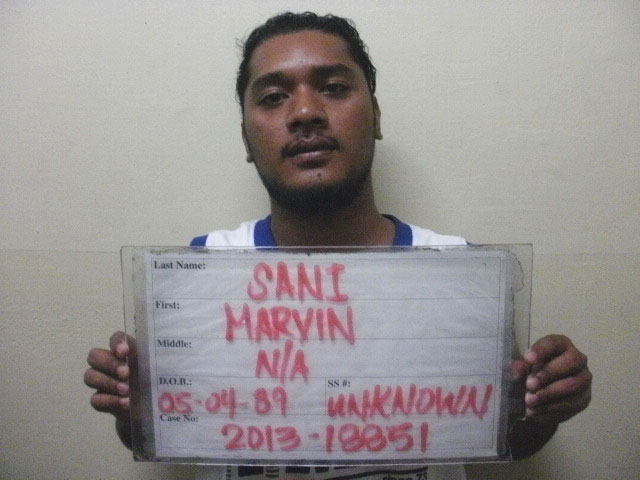 The Guam Police Department’s Criminal Investigation Section has identified the victim from Sunday night’s fatal stabbing at the Pacific Garden’s Apartments in Dededo.

The victim is 26 year old, MICHAEL TONY (Male, Chuukese), from Dededo. During the incident he sustained multiple stab wounds throughout his body.

Although detectives have made an arrest in the case and have identified the victim, the case remains open. Detectives expect to close the case within the week and
anticipate forwarding the case to the Office of the Attorney General for prosecution.