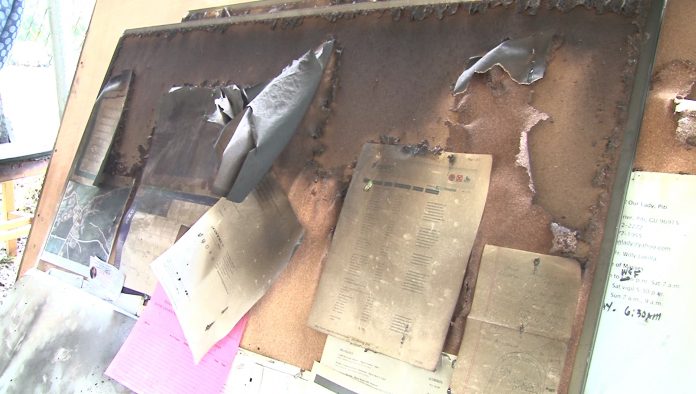 The Piti Mayor’s Office is temporarily located at the Piti Youth Center.

Guam – Despite a fire that ravaged the Piti Mayor’s Office early yesterday morning, Mayor Ben Gumataotao says services will not be disrupted. Meanwhile, police continue to investigate who might be responsible for burglarizing the place.

Longtime Piti Mayor Ben Gumataotao says he got the call around 4 am about a fire that broke out at the Piti Mayor’s Office. Fortunately, firefighters were able to put out the flames, but the damage by then was already done. Gumataotao says he believes someone broke into his office and then set the place on fire.

“Well somebody breaked [sic] in, stole something and took the best way for them to get rid of evidence–burn it up and no one could know what happened,” noted Gumataotao.

But as far as service Piti residents, Gumataotao says they have temporarily set up shop at the Piti Youth Center. What’s left of their office was taken to the Youth Center where residents can continue to receive services.

The Piti mayor has a message for whomever is responsible for this crime.

“To me, actually, I just feel sorry for the person that’s done this. Other than that, God bless him for not being on his right mind to do this thing. I hope that he will come up front and I’ll forgive him,” said Gumataotao.