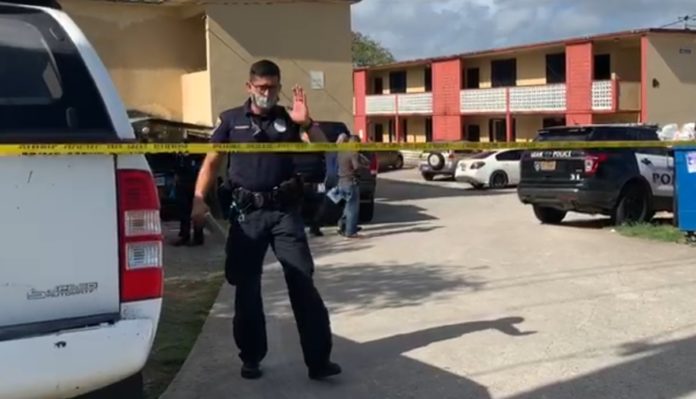 A man was found dead at the Taitano apartment building on JA Camacho Street in Mongmong-Toto-Maite Monday morning.

He said the victim is reported to be a man in his late 40s. He was found inside a second-floor apartment about 7 a.m. this morning.

Detectives are conducting interviews. And an autopsy will be performed “to determine the cause and manner of death,” said Sgt. Tapao in a release.

PNC spoke with Teresita Villanueva, a woman who lives beneath the apartment where the dead man was discovered.

“I was just laying down and then I heard something a loud noise. I don’t know what it is but it go ‘boom!’ so I just laid down and I ignored it. But the second time I had to jump up because I feared for the safety of the people who stay in the bottom floor,” Villanueva said.

She added after hearing the sound for a second time she ran out to try to see what the noise was.

“I ran out to see what that loud noise. I thought something exploded. But when I looked, I saw the lady running down the street. I never see her run like that,” she said.

Villanueva says that it was around 7:15 in the morning when this occurred, further telling PNC that police and medical units showed up shortly thereafter.

Janet Burkhart lives in the apartment complex directly behind the apartment where the man was discovered. She was awakened by the loud noise.

“I heard two … like noise … like metal noise loud…pack..pack… that’s all I heard. I didn’t go outside because it’s always noisy on that side of the apartment. It’s just normal occurrence, here it’s just noisy,” Burkhart said.

Both women told PNC that the man and woman were rarely seen outside of their apartment, adding that they are unsure if the deceased man was a tenant.

MTM Mayor Rudy Paco was also on the scene this morning, sharing with PNC that the area where the incident occurred is known to be troublesome.

“JA Camacho street where Taitano Apartments is located is a problem street. We’ve been having all kinds of issues in this area as well as the Taitano apartments ranging from disturbing the peace, drunk people, you know, being belligerent … all kinds of stuff having to do with family violence,” the mayor said.

He added: “My neighborhood watch commander just lives down the street. He informed me that he heard two gunshots this morning and then GPD and the ambulance were on the scene. The only information I got was that a male individual was shot and that’s about it. GPD didn’t give me anything else because it’s still under investigation.”

Police are not able to provide much information on the case, stressing that the investigation is in its preliminary stages. However, Tapao did confirm that a man in his 40s has died.

Tapao says that criminal investigators continue to conduct interviews and await an autopsy to be performed to determine the cause and manner of death.