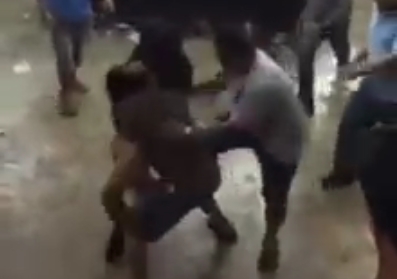 Warning: this video has graphic violence.

Guam – A video of a riot that took place at the Dededo cockpit over the weekend has gone viral on social media.

In the beginning of the video, a group of men in the cockpit are cursing and yelling at a few other men in the crowd. Then, a couple of those men were seen throwing objects at the crowd and within seconds, another group of men are seen punching and kicking one of the bystanders. Then smaller fights broke out in the crowd. One man was seen pulling another man to the ground while a group surrounded him. Then the camera pans to the right where the first bystander was again being punched.

According to Guam Police Department Spokesman Officer Paul Tapao, an assault complaint has been filed and documented by Dededo Precinct personnel. Tapao says GPD’s Criminal Investigation Division will be conducting the follow-up investigation by interviewing witnesses or any additional victims in efforts to apprehend all individuals responsible for the altercation. This case remains open.