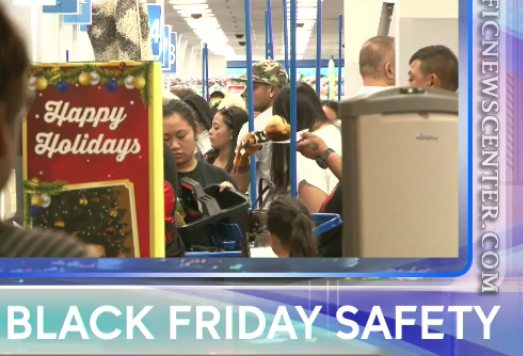 Black Friday brings some of the biggest discounts and sales to consumers but as GPD Spokesman Sgt Paul Tapao reminds the community, it’s also a time when residents need to keep their guard up to prevent becoming a target for opportunistic thieves.

Whether you have already headed out to take advantage of Black Friday sales or if you plan on hitting the doorbuster sales tomorrow, GPD Spokesman Sgt Paul Tapao says be alert and aware of your surroundings.

“Go to and from the parking lot into the establishment park in an area that’s well lit. Try to go with family members. Two is always better than one — it’s extra eyes and an extra body. Criminals are opportunistic individuals and they’ll take advantage. If they see you as easy prey, it’s pretty much game on. But if you have strength in numbers that’s always something good,” Tapao said.

But if you plan on going alone, make sure you have your keys in hand. Should you notice a suspicious character press the alarm button on your keys to draw attention to you.

Also, get off your phone, stay off your phone and focus on what needs to be done and that’s just walking and being aware of your surroundings.

Tapao also shares that situational awareness even when utilizing an ATM is imperative. But your not only looking out for lurking individuals.

Tapao says that once you’ve completed shopping, make sure to properly store your items out of the public’s view like in your trunk or drop them off to a nearby relative before heading to the next shopping destination.

Tapao also reminds the community to practice safety by masking up and adhering to the social distancing guidelines.