Guam Police Spokesman Officer A.J. Balajadia reports that Garrido has been charged with murder, aggravated assault, burglary, possession of a deadly weapon in the commission of a felony and theft of a motor vehicle.

Mafnas was found dead in her Toto-Canada home Saturday evening. Guam Police Spokesman Officer A.J. Balajadia says the cause of her death was “blunt force trauma.”

Medical Examiner Dr. Aurelio Espinola performed an autopsy on her Monday and he told PNC News that he has no doubt that the woman was the victim of a homicide. However he said he could not disclose any details because police have asked him not to.

Officer Balajadia released a photo of  a “person-of-interest” Monday which was taken Saturday afternoon by a witness who said he saw Garrido crashed a white 4-door Chrysler sedan into a tree and walked away from the vehicle.

The vehicle was owned by Mafnas, says Balajadia. Her body was not discovered until hours later inside her home. Balajadia could not say whether or not Garrido was related in any way to Mafnas, nor could he speak to motive.

Officer Balajadia credited the public’s assistance which he called the “key” to the arrest in this case. 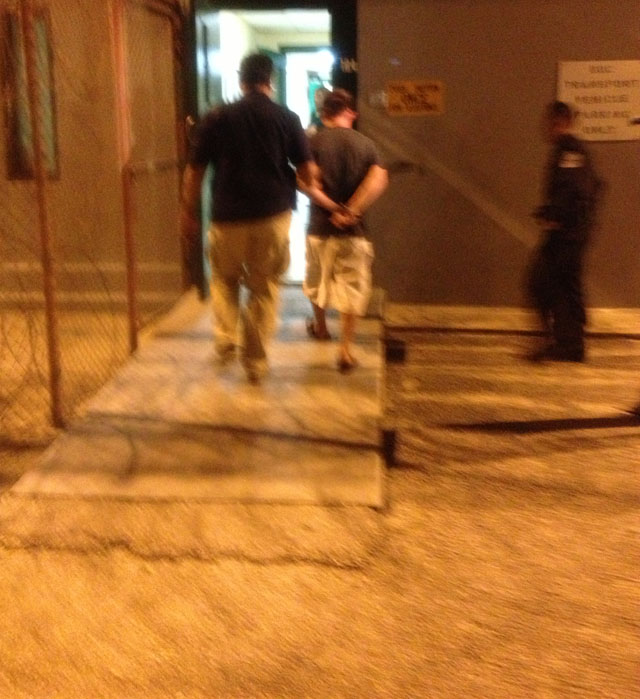 READ the release from GPD Officer Balajadia below:

This evening detectives with criminal investigations arrested the person of interest that had been taken into custody earlier in the day by US Marshals and a GPD Task Force Officer.

Keith Jermane Garrido, m/Cha/20/Yona for Murder, Aggravated Assault, Burglary, Use of a Deadly Weapon in the Commission of a Felony and Theft of Motor Vehicle.  He was booked and confined.

This case is closed, no additional arrest are anticipated.  We’d like to thank the public for their help in providing information in this case.  The collaborate effort by our community (media, other law enforcement, the public) was key in helping the Guam Police Department solve this case.

Earlier this report was filed by PNC’s Janela Carrerra:

U.S. Marshals with the Taotaomona Fugitive Task Force have apprehended a man who police believe to be a “person of interest” in the Mafnas homicide investigation.

After a search in Pago Bay Tuesday morning turned up no one, the man they’re looking for was found in the Okkodo area of Dededo.

Officer Balajadia: “The person of interest that we shared with the media yesterday has been taken into custody around the Dededo area about 12:30 this afternoon. He’s being questioned by detectives and we’ll find out what his relationship with him having the vehicle to the Mafnas case.”

The case is still ongoing says GPD Spokesman A.J. Balajadia and not much was provided as Criminal Investigations Detectives try to piece together the details and events that took place on Saturday at 63 year old Nancy Mafnas’ home.

Guam Police yesterday released a photo of the person of interest.

The photo was taken by witnesses who told police they saw this man drive off  the roadway and into a tree in a white Chrysler 4 door sedan. He then walked away from the accident, which happened between 3 and 3:40 Saturday afternoon. Police later learned that the car belonged to Mafnas whose body was not discovered until later that evening, just before 8 pm.

Balajadia says that Mafnas died from “blunt force trauma.” And Medical Examiner Dr. Aurelio Espinola confirms it was a homicide, but said that Police told him not to comment further on his autopsy results.

While it is clear that Police have the “person-of-interest” seen in the photo, it is not clear what his relationship is to Mafnas or why he was driving her car.

Officer Balajadia: “We don’t even know whether in fact that vehicle had been stolen. So that would be an over step on our part. We need to know what the relationship was with him having that vehicle. According to witnesses they saw him exiting that vehicle so we need to find out exactly what the correlation is.”

Balajadia also tells PNC that the person of interest had apparently been wanted on a warrant of arrest in a separate case. And in that case the man was wanted for family violence.”

Officer Balajadia: “I believe he was wanted on a warrant of arrest and we’re going to go from there. “

PNC: A  warrant of arrest previous to this?

PNC: “Do you know what warrant was?

Officer Balajadia: “I think it was a family violence case.”

PNC: “Is that the reason why he was picked up by the U.S. Marshal’s instead of GPD?”

Officer Balajadia: “I’m not exactly sure. I have no information of the circumstances of how the task force was able to locate this individual. And how he’s connected to this particular case.”

Balajadia also responded to claims that Mafnas had made a 911 call earlier in the day. This morning on the K-57 “Patti on the Radio Show”
a woman called in claiming that a 911 call had been made from Mafnas.

So we contacted Guam Fire Department and requested records of 911 calls made on Saturday. But Spokesman Ed Artero said those records can not be released to the media until GPD has completed its investigation.

Balajadia says GPD is also investigating  how the Police officer dispatched to the area on Saturday responded to the events after more reports that the police did not act quickly enough to the scene of the accident.

Officer Balajadia says investigators have worked long hours on the case and will eventually coordinate with the Attorney General’s Office.

Anyone with further information is asked to contact the Criminal Investigations Division at 475-8557.