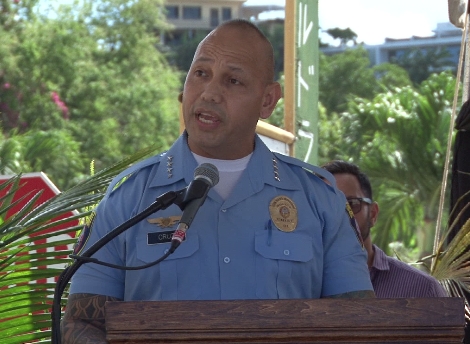 The Guam Police Department kicked off its new Mandaña program yesterday, which aims to get GPD directly involved with the community to get better feedback on the community’s needs.

Officers from within each of the four precincts were officially deployed to meet with community members at various villages throughout the island. Chief of Police J.I. Cruz emphasized the need for a more proactive approach to crime in addition to traditional reactive policing.

“I think that it’s important to note that, while the concept of community-oriented policing has been around for several decades in our nation, this concept has never been fully embraced by the Guam Police Department until now,” Cruz stated. “Community policing is very proactive, where the police collaborate with the community to prevent crime before it happens. All this is possible by establishing and maintaining three key components: community partnerships, organizational transformation, and problem solving.”

The Mandaña kickoff was held yesterday morning at the Tumon Police Koban.