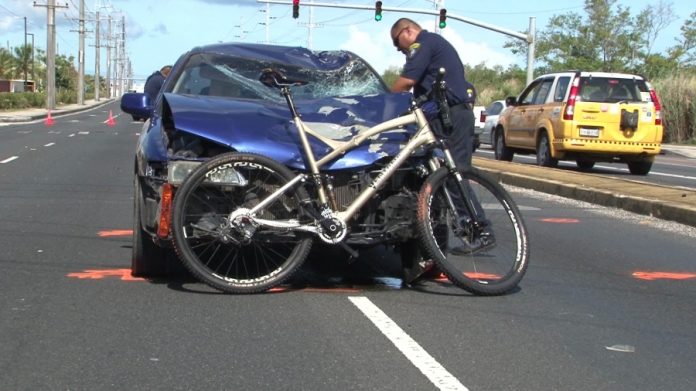 Eddie John Camacho of Sinajana has been arrested, booked and confined for hitting cyclist Eric Bell while he was walking his bicycle through a crosswalk on Marine Corps Drive.

Guam – GPD has arrested 23 year old Eddie John Camacho for the traffic accident that lead to the death of cyclist Eric Bell.

Bell, who was 6’7” tall, was hit while walking his bike in a crosswalk on Marine Corps drive near the Micronesia Mall on the morning of June 2nd. He was wearing bright clothing when he was struck by Camacho who was driving a 1995 Honda Accord northbound. Bell was described as unconscious and unresponsive when medics arrived at the scene. He passed away at the Guam Regional Medical City on June 17. On June 21st GPD investigators shut down part of Rt.1 to further investigate Bell’s death. Camacho maintained his innocence today when he was being taken into the Hagatna precinct for processing.

“I was not texting and driving nor calling I was falsely incriminated I was falsely incriminated by a police who leaked information about me. So already I have my own proof I was not texting and calling I know that for sure. I don’t even smoke I don’t drink. I just go to work home feed my family and that’s it. I was coming home from work. The sun was really strong. I’m sorry,” said Camacho.

Camacho was arrested and charged with imprudent driving, speeding in a posted zone, disobeying a red traffic light, failure to yield and vehicular homicide.