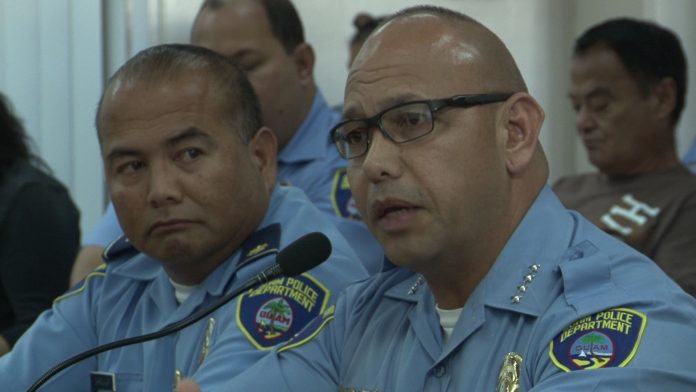 GPD Chief JI Cruz says their primary funding source for their CAPE Volunteer program has diminished because more people are following the law.

Guam – The Guam Police Department could face some problems providing security for the upcoming Festival of the Pacific Arts next year. At a public hearing on a bill that would give CAPE volunteers extended duties, Police Chief JI Cruz said they are struggling to find funding to recruit more officers and volunteers.

Guam Police Department Chief of Police JI Cruz testified in favor of Bill 197 at a public hearing yesterday. The bill, introduced by Speaker Judi Won Pat, would authorize the chief of police to recruit more volunteers to be able to patrol the 12th Festival of the Pacific Arts, which will be held on Guam next year and is expected to draw thousands to the island.

The funding source that has been identified for this bill is the enforcement of accessible parking and littering fees. The problem, Chief Cruz points out, is that because enforcement has been successful, less people are violating those laws.

“I will tell you that based on the analysis that we’ve done in the department and what we’ve been briefed, at the onset we think that the fraction of the accessible parking and the littering violations that were coming to the Guam Police Department were, so to speak, were assisting the program. However, we’ve noticed that because of their success, that the amount of accessible and littering has gone down, and that’s to the success of the CAPE volunteers as well as CVPR officers–so to that point because we see a drop, the funding source coming in to feed that program also has diminished,” Cruz told Speaker Won Pat. “So to answer your question, up front I’ll tell you that that funding source to be able to support the CAPE volunteer program is not quite meeting the mark.”

Next, Chief Cruz spoke about FestPac Security. He says he’s been appointed as head of the security for FestPac which means he will have the responsibility of ensuring there is enough security provided from both local and federal law enforcement agencies. For the police department, Cruz says he plans to commit at least 60 officers during FestPac, “whether it be uniform officers, full time officers, police reserves or CAPE volunteers. I’ve committed 60 personnel.

But it is my intent to recruit more volunteers, get them trained up and get them the minimum equipment that we would need to be able to augment that.”

However, Chief Cruz says he’s unsure as to how much more funding GPD will need to be able to recruit those 60 officers. Right now, he says, GPD only has eight CAPE volunteers.

“In taking a look at that, we are looking at appropriations or monies from within, as well as funding from the FestPac committee to assist us in that. I do not have for you at this point a dollar figure that I could attach to that 60,” he says.