Leitheiser said, “Because of this successful compliance with those recommendations, he is cleared for consideration of the position of Chief of the Guam Police Department from a mental health perspective with the caveat that he is to continue these efforts.”

Senator Jose “Pedo” Terlaje, who has oversight authority over the department, issued a statement following the evaluation.

According to Terlaje, the additional information provided by the Chief’s primary care doctor cleared him “fit for duty,”was the recommendation Leitheiser made to Ignacio to ensure his health and safety.

The medical clearance from his primary doctor was provided in the committee report.

Terlaje said he is pleased with the outcome and will move forward with Ignacio’s appointment by making a motion during the session to place his appointment in the voting file. 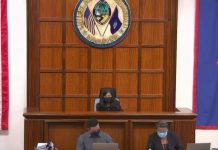