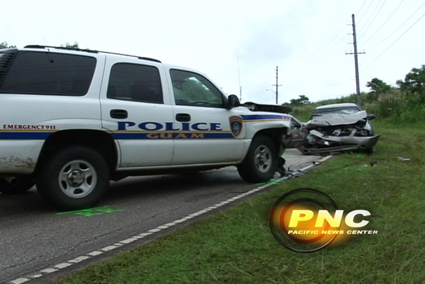 Guam Police Spokesman Officer A.J. Balajadia reports that the accident happened around 3:16 am along Route 17 by Our Lady of Peace Cemetery.

Two female passengers inside the Nissan Sentra were transported to Naval Hospital. Navy Public Information Officer Coleen San Nicolas reports that a 20 year old female was in critical condition Sunday afternoon but was updated to stable condition Monday.  The nature of her injuries were not released.  The other 19 year old female is in stable condition.  San Nicolas could not say what her injuries are, but Officer Balajadia reported she suffered injuries to her face.

Meanwhile, the two police officers inside the patrol car were transported to GMH complaining of chest and back pain. Monday morning, GMH Spokesman Connor Murphy saidthe two officer were released on Sunday.

Officer Balajadia says the driver of the Sentra was also transported to GMH and Murphy says he remains in stable condition in the surgical ward.

The cause of the accident remains under investigation.