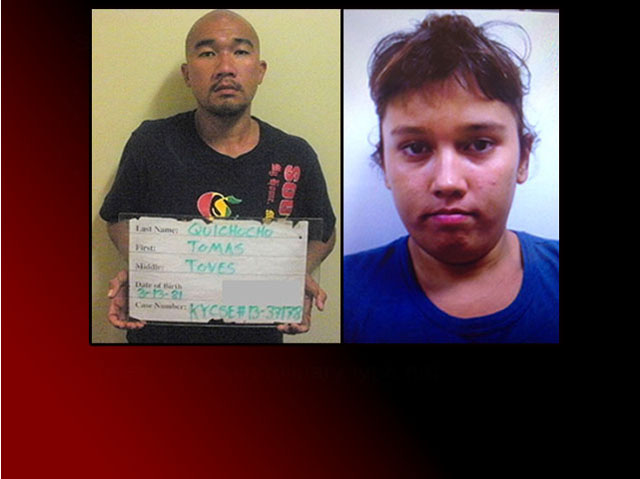 Guam – Tomas Toves Quichocho, already accused of robbing a woman at knife point outside her home early Saturday morning, has now been implicated in the robbery of a visiting Norwegian woman a few hours earlier.

“As we probed,  it was discovered that both were involved in another robbery where the victim (female/Norwegian) was dropped off at the Agana Pool,” states Officer Balajadia in a release.

Monday, Officer Balajadia reported that the 21 year old Norwegian woman was visiting her Navy boyfriend, they were at a Tumon Club last Friday night, early Saturday morning, when they got into a fight and the woman left, on foot, on her own.

The Norwegian woman told police she walked up the hill towards Bishop Flores Loop where, shortly before 2am Saturday,  she was offered a ride from another woman in a white SUV. But when she got in, a man in the back with a handgun demanded money. The Norwegian woman said she didn’t have any money and eventually she says the man took her cell phone and she was dropped off by the Hagatna pool.

Balajadia reports that a “manhunt” launched by the Criminal Justice Task Force located Jessilyn Babauta at the Holiday Resort in Tumon “as she was using a Phone.”

The 32 year old Quichocho of Sinajana, had already been arrested for an incident that occurred a few hours later.

He is accused of robbing a 45 year old woman at knife point outside her home in Tumon Heights shortly before 3am Saturday. He has already been booked and confined for Robbery, Conspiracy, Guilt Established By Complicity, and Assault.  He is now facing additional charges in connection with the robbery of the Norwegian woman.

Our continuing investigation revealed a second suspect for conspiring with Quichocho. Additionally, as we probed it was
discovered that both were involved in another Robbery where the victim (female/Norwegian) was dropped off at the Agana Pool.
Resulting from the manhunt Criminal Justice Task Force members apprehended Jessilyn Babauta as she was using a Phone at the
Holiday Resort in Tumon.

She was Booked and Confined.