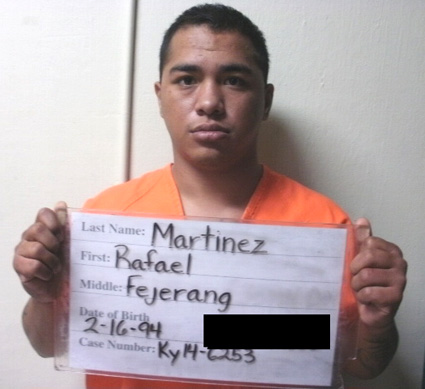 Guam – It began in Piti with an alleged home invasion during which the victim was beaten and bound. It ended a few hours later in Yona when police finally apprehended a suspect who they say sped away from them in a stolen vehicle, nearly running over 2 officers as he fled.

The suspect is Rafael Fejerang Martinez. He has been booked and confined on a variety of charges including  terrorizing,  kidnapping and assault on a police officer.

According to GPD Spokesman Officer A.J. Balajadia, the Piti victim told police he was outside his home last night when Martinez tried to assault him. But the  victim was able to fight him off, get back into his home and lock Martinez out. By the time police arrived, Martinez had fled on foot.

But then an hour later Martinez returned to the same home and, Officer Balajadia reports, he assaulted the victim again, inside his home, and then “tied him up with zip ties … taped him up with duct tap … placed him inside the bathroom” and stole his car.

The victim suffered “visible injuries” says Officer Balajadia, and he was taken to GMH for treatment.

An All Points Bulletin [APB] was issued for the victim’s Gray Nissan Juke. It was later spotted,  just after 11pm, at a home in Yona.

Several people were seated outside the residence, including Martinez, who was dressed in military fatigues, full “Battle Dress Uniform”, says Balajadia.

When police approached, Martinez ran towards the stolen Nissan, hopped in, locked the doors, started the vehicle, and sped off, “despite being given several verbal commands by the officers to cease his actions and exit the vehicle” says Balajdia who adds that Martinez “almost” ran over 2 officers as he sped away.

Martinez  eventually ran off the road, the Nissan turned on its side, at Route 4 by Bordallo’s Curve. Martinez fled into the jungle, but was eventually flushed out and arrested without further incident.

He has been booked and confined for:

READ the release from Officer Balajdia below:

Earlier that evening (04/07/2014) Officers from Agat Precinct responded to a reported “Disturbance” at a residence in Piti.  Upon their arrival they met with the victim who informed Agat Precinct Officers that MARTINEZ  had assaulted him and attempted to tie him up with zip ties while they were outside the residence.  The victim was able to fight MARTINEZ off and fled into his residence to seek refuge, locking MARTINEZ out.  He then contacted the police to report the incident.  APC Officers responded, however MARTINEZ had fled on foot prior to their arrival.

The victim sustained visible injuries as result of this second incident and was transported to Guam Memorial Hospital for further medical treatment.

11:07 P.M. (Central City) Yona, the victims vehicle was located parked at the residence with several individuals sitting outside of the residence.  Upon officers exiting their patrol vehicle they noted MARTINEZ who was attired in full military fatigue BDUs run towards the suspect vehicle.  MARTINEZ subsequently locked the vehicle doors and started the vehicle, officers attempted to stop him from leaving.  Despite being given several verbal commands by the officers to cease his actions and exit the vehicle,  MARTINEZ accelerated the vehicle almost running over both Officers.

The suspect had ran off the roadway, Rt.4 by Bordallo’s Curve (towards the left side/oncoming lane) resting on its passenger side a top a hill cress and jungle patch. Officers immediately surrounded the vehicle and conducted a check, MARTINEZ was not found within the vehicle.  Officers were successful in flushing MARTINEZ out from the jungle area. He was apprehended without further incident and as a result he was arrested for the following criminal charges.

As a result of this investigation, the following cases have been closed.