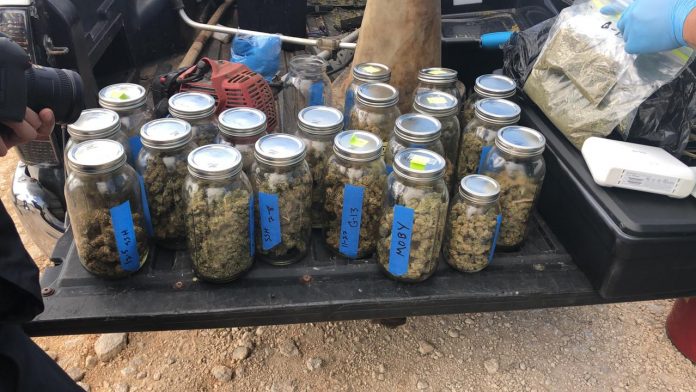 Guam – A video circulated on social media Wednesday afternoon depicting what appeared to be a drug bust.

While the Guam Police Department could not comment on the incident, the video paints a picture of what went down along Route 16, Barrigada.

Guns drawn, at least three officers approach a man wearing an orange reflective vest standing along the roadway near a white pickup truck. A second man in a black and white shirt and shorts is also seen standing at the bed of the truck. Both men appear to be complying with instructions from authorities showing their hands to authorities before placing them on the truck.

Earlier in the afternoon, GPD issued a media release stating that GPD Highway patrol was investigating a crash involving a police vehicle on Route 16 Army Drive by Rev&Tax building. The road crash was in the same area as the apparent drug-bust shown on the video.

PNC reached out to GPD Spokesman Sgt. Paul Tapao for comment but he would not confirm if the two incidents were connected.

In reference to the video, Tapao said GPD is currently conducting an investigation. However, he said GPD will not disclose any information at this time as it may jeopardize  the investigation.

Meanwhile, a picture also surfaced depicting at least 19 jars containing marijuana.The marijuana on the photo appears to be on the bed of a pickup truck similar to the one from the video. If each jar contained about an ounce of marijuana, the street value of the bust is estimated at between $15,000 and $19,000.

No confirmation has been made by police as to the identities of the individuals from the video as the investigation is ongoing.

The confinement records identify one Arthur Dominguez Chan, who was arrested for carrying a concealed firearm, aggravated assault, robbery, home invasion, burglary, possession, illegal delivery, dispensing and manufacturing a scheduled 1, 2, or 3 controlled substance. Also arrested was Quincy Perez Taitano, who was arrested on the same offenses to include illegal possession of marijuana.

The magistrate complaint against Chan and Taitano does not indicate charges related to drug possession. The two are accused of entering a home, where Chan and Taitano allegedly used a spray to immobilize the victim before assaulting him. Court documents state the two men then took items from the home to include a video recorder, and DVR box.