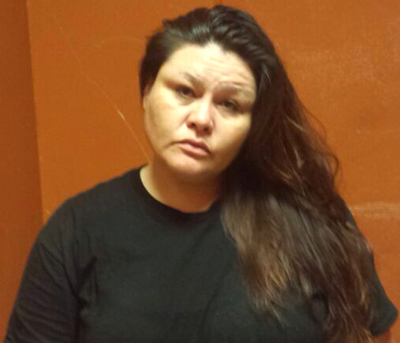 Guam – Guam Police arrested 2 people for this morning’s armed robbery at the “Are You Game” Gameroom in Mangilao.

Both have been booked and confined.

According to a release from GPD Spokesman Officer A.J. Balajadia,  a male cashier reported that a woman, armed with a knife, entered the gameroom just before 3am this morning and demanded money from him. She got a handful of cash and then tried to rip-off a bracelet from a  female customer, but the customer fought her off and the woman ran off on foot towards BPM Road.

Two witnesses to the robbery gave chase, but as they pursued the woman towards a jungle area, a man in a silver colored Honda “stopped in the middle of the roadway …  and attempted to assault them with a baseball bat. “

Officers from the Hagatna Precinct, joined by Agat Precinct Officers and members of the Criminal Justice Strike Force all responded and set up a perimeter around the area.

Hagatna Precinct Command Officers entered the jungle, found the woman and they also found cash in her back pocket, and  the drug “ice” in her front pocket.

The cashier who was robbed and the 2 witnesses who gave chase were brought to the scene and positively identified  Bianca Brooke Borja “as the female individual responsible for committing the Robbery to the Gameroom.”

Officers from the Agat Precinct and the Criminal Justice Strike Force continued to search the the surrounding area looking for the man driving the silver Honda and at 3:45am they spotted a vehicle fitting the description on UOG Drive by Washington Drive in Mangialo.

The vehicle was pulled over and George Sae Il Son was arrested.

MANGILAO – At about 2:52 a.m, Wednesday, 03/19/2014 Hagatna Precinct Command received a call of a reported Armed Robbery at the “Are You Game” Gameroom located within the same building as Domino’s Pizza and Winchell’s in Mangilao.  The male cashier of the game room reported that a female individual described as:

had entered the game room armed with a knife and demanded money from the cashier. As a result, she obtained a handful of cash, she also attempted to rob a female customer of her jewelry (bracelet) but was fought off by the customer.  The female suspect then ran on foot towards BPM Road in Mangilao.  Within minutes members from Hagatna Precinct Command responded and arrived at the scene.  They were shortly joined by other members of the Criminal Justice Strike Force (CJSF) and Agat Precinct personnel.

Arrested for 1st DEGREE ROBBERY (2 counts), POSSESSION AND USE OF A DEADLY WEAPON (2 COUNTS), CONSPIRACY TO COMMIT ROBBERY AND RESISTING ARREST

Shortly after BORJA’S apprehension members from APC and the CJSF conducted a surrounding area check for the suspect vehicle (Honda Civic) whereby at about 3:45 a.m. this morning units spotted a vehicle fitting the suspect vehicle along UOG Drive by Washington Drive in Mangialo. The vehicle was pulled over along UOG Drive by the Castle Building, the male operator later identified as:

Arrested for CONSPIRACY TO COMMIT ROBBERY, GUILT ESTABLISHED BY COMPLICITY, AND CRIMINAL FACILITATION

BORJA and SON were booked and confined