Guam – Guam Police have arrested Doreen Ann Howard Ulloa and Ernani Macam Olivares in connection with the theft of a Chinese woman’s pursue early this morning in Tumon.

According to GPD Spokesman Officer A.J. Balajadia, a Chinese woman went to the Tumon/Tamuning Precinct at 12:30am and reported that a man had snatched her purse while she was sitting with a friend on a bench in front of the Fuji Red Massage on Fujita Road across the street from the Tumon Precinct.

The women is here on Guam visiting friends and family from Shanghai China, said Officer Balajadia and she had sustained some bruising to her right upper forearm which was caused when the suspect pulled the purse away from her.

She described the man as being slim built, dark complexioned, possibly Chamorro wearing a red t-shirt and blue jeans. She said the man fled in a vehicle described as being a gray in colored sedan.

Patrol units conducted an immediate canvas of the roadways and establishments nearby in hopes of possible locating the suspect and vehicle.

About 1:33am, Dedeco Precinct Officers spotted the suspect vehicle and pulled it over on East Nandez St. by Mecheche Road.

Officer Balajadia identified the 2 arrested as :

#2 Ernani Macam Olivares, Male/Filipino/36/Tamuning for Robbery, Conspiracy to Commit Robbery and Fraudulent use of a License Plate.
Mr. Olivares was transported to Hagatna Detention Facilities, where he was booked and confined. 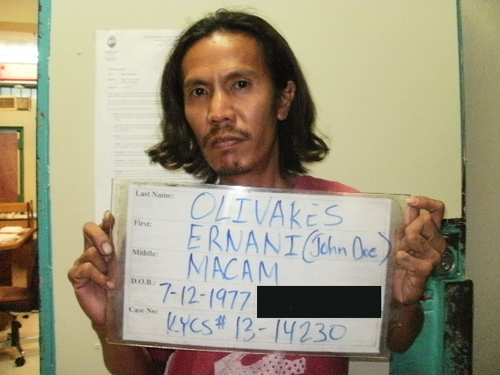