Guam – John Anthony McCord Jr. and Paul Daniel Cepeda have both been arrested in connection with a July 2ed shooting incident in Dededo.

GPD Spokesman Officer A.J. Balajadia says the shooting incident was reported Wednesday July 2. The driver of a Honda Civic told police he was stopped at the intersection of Mendioka Road and Alegeta Road about 6pm that evening when he noticed a man inside a silver Prius behind him holding a handgun. The Honda driver says that man fired 2 shots at his Honda.

Police later recovered “what appeared to be a projectile on the floorboard” of the Honda, says Balajadia.

Three weeks later, Balajadia says detectives followed up on some new leads which led to this past Thursday’s arrest of  the 29 year old Cepeda. He did not say what new information led to the arrest. And the motive for the shooting has not yet been revealed.

Cepeda, a Tamuning resident,  was booked and confined for Attempted Murder, Possession and Use of a Deadly Weapon in the Commission of a Felony, Possession of a Firearm without a Firearms Identification Card.

Also on Thursday night,  police issued a wanted notice for McCord, warning he was dangerous and might be armed with a .44 Magnum pistol. Then on Friday about 11am  police,  along with a K9 unit, went to GHURA Housing Unit #501 in Dededo to look for McCord.

The man and woman inside the unit were “combative and prevented officers from making a check for McCord,” according to Balajadia. Officers then saw McCord fleeing from the backside of the residence. They gave chase, and caught him. 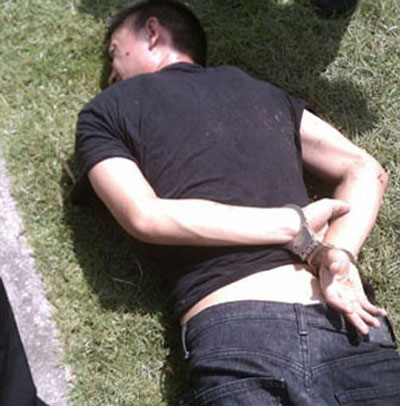 The 21 year old McCord, also of Tamuning, was booked and confined  for Resisting Arrest, Conspiracy, Guilt by Complicity, Illegal Possession of a Firearm.

Atanacio Sablan Cepeda and  Katherine Joseph Nason were also arrested on various charges related to their alleged attempt to shield McCord from arrest.

DEDEDO – 10:55am, Friday, July 25, 2014, Criminal Investigations Division, Criminal Justice Strike Force, K9 Unit made a check of a residence
in Ghura 501, Dededo, of a known friend of McCord. While at that location a female and a male individual were at the residence who were being
combative and prevented officers from making a check for McCord. Officers then observed a male individual later identified as John McCord flee
from the back side of that residence. Officers gave chase where they later apprehended McCord. Officers then proceeded back to the residence
and arrested both the male and female.

McCord was wanted for questioning in reference to the same shooting incident that Paul Daniel Cepeda was arrested for yesterday, July 24, 2014.