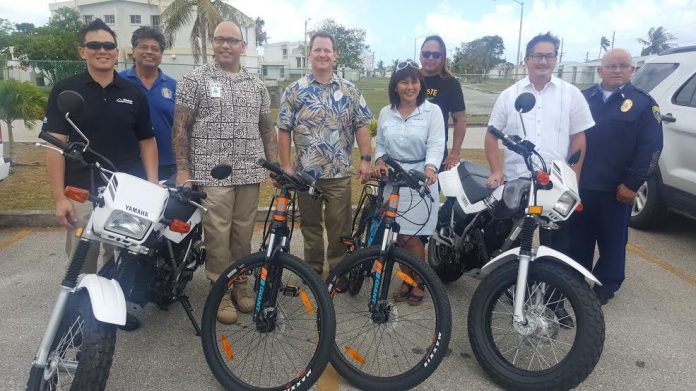 Guam – The Guam Police Department officers in Yigo and Dededo will now be patrolling the villages using their newly donated mountain bikes and dirt bikes.
Donated by various businesses within the community, the bikes will assist patrol officers in their daily patrol work. According to GPD Spokesman Officer Paul Tapao, within the last 6 months, the Dededo Precinct Command, has implemented a mountain bike unit to patrol various neighborhoods within the Dededo and Yigo proper by providing visibility to deter crime. As for the dirt bikes, they will help officers access roadways that are not accessible by standard patrol vehicles.
GPD Chief Joe Cruz says, “Since I’ve been the Chief of Police, we’ve been reaching out to different neighborhoods, villages, and communities to find out how we can make Guam safer. As part of the neighborhood watch program in Dededo and Yigo, the community is collaborating with GPD and outfitting us with two dirt bikes and two mountain bikes so we’re more visible.”