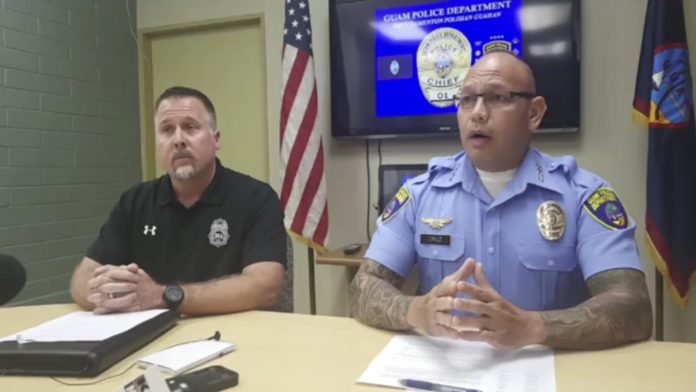 Guam – Coaine was the hot topic in this afternoon’s press conference with the Guam Police Department and DEA who say they aren’t backing down from the War On Drugs But it looks like maritime enforcement needs some tightening up.

Nearly $1 million in cocaine has been seized since the initial discovery of 2 kilos of cocaine washed ashore in Mangliao. This discovery was followed by a resurgence of cocaine busts and arrests within a short few months, making history with the largest single bust of cocaine the island has ever seen.

Thirty-five pounds of cocaine was seized during a raid of Robert Afaisen’s Talafofo home, his arrest and several other cocaine arrests according to court documents are directly linked to the cocaine which washed ashore in Mangilao and AAFB.

While neither agency could divulge information regarding the arrests or investigations into the source of the cocaine, former Customs and Quarantine Director Jim McDonald has said that chines writing was discovered on the packages which could indicate that it came from a Chinese Vessel.

“The parcel had some Chinese markings on it you know so we are figuring that it probably came off a Chinese boat,” previously shared McDonald.

This information however was not confirmed by GPD, instead they maintain that it is still under investigation.

“Well, I would tell you that we don’t have any definitive information that what washed up on our shore came from a Chinese Vessel that is something that we are still taking a look at. We don’t know for sure whether it did come from that vessel or any other vessel for that matter,” said Cruz.

This raised the question of how secure our oceans borders are.

With over 35 pounds of cocaine making its way into our island through our waters does this mean that our waters are less secure than the postal mail system?

“Interdiction at the border while we do have concurrent jurisdiction is primarily the function the of the Guam Customs and quarantine working in conjunction with the us Coast Gaurd. GPD does have a maritime enforcement not for boat safety not drug interdiction,” clarified the GPD Chief.

Meanwhile, DEA Resident Agent in Charge Edward Talbot did assure that they are working to ensure that maritime enforcement efforts are beefed up.

“The DEA is always working to identify transnational criminal organizations were in 222 offices domestically over 70 countries and that’s what we are here to do this is why DEA forces are created and our partnerships with the local law enforcement are paramount to our investigations to our success,” shared Talbot.

As you may recall, during a public hearing the Guam Customs and Quarantine stood by the assertion that majority of the islands drugs are smuggled through the mail. Despite this it is clear that more needs to be done to maximize maritime enforcement efforts.