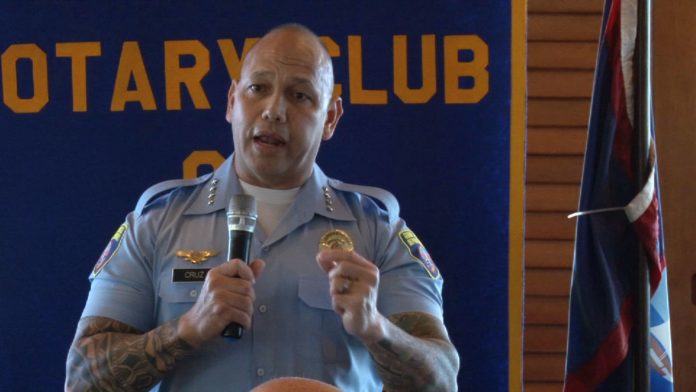 Guam – Chief of Police Joseph “J.I.” Cruz spoke to the Rotary Club of Guam about GPD’s mandanna community oriented policing strategy which was implemented in December of 2016. He spoke about the new initiatives GPD has launched to combat crime and he said they are even developing a mobile device app to allow residents to report crimes.

The chief says that after implementing this community-based approach they found that there are certain hotspots of crime. A lot of crime happens in Dededo which also happens to be the most populated village of Guam. In Dededo the hotspots are the Micronesia mall area, Hahasu/Swamp rd., Zero Down / Gil Baza subdivisions, Nevermind rd., Taitano apartments, Nando st. & Macheche rd. The most common calls in these areas are alcohol-related, family violence, assault and rioting. Then there is the Tumon-Tamuning precinct area. The hotspots here are the Hemlani apartments in Harmon, the Granada apartments in Tamuning, the Beach Bar at Gun Beach, the Palm Breeze abandoned parking structure in Tumon and the San Augustin apartments in Harmon. The most common calls here are alcohol-related, family violence, and assault and rioting.

“The initiative that pays the most dividends the most returns back to the Guam Police Department is this program right here called the neighborhood watch program. And I’ll tell you this thing although it’s been around for many years it started in the United States through the sheriff’s association they were the first ones to put it out. It’s been on Guam for many years several decades but back in 2015 when I became the Chief of Police I started to work with the Lt. Governor’s office and this thing has really taken off,” said Chief Cruz.

To expand on the concept of a neighborhood watch program and incorporate modern technology GPD is working on a mobile phone app. This app will essentially allow people to report crimes that they witness via an app they will call “hands on intelligence”.

“We’re gonna empower the community even more to be able to download that application so that as you see crime happening in progress you can take a picture of it you can video that and shoot it to the Guam Police Department to the Guam Fire Department and we’re looking to expand that. So again, the neighborhood watch program and modern technology is working to drive crime down,” said Chief Cruz.

The second most effective initiative they have recently implemented is the Mandanna Drug Task Force. Although this task force is primarily focused on busting dealers of crystal methamphetamine or ice the chief warns that this task will bust any drug dealer.

“If you’re doing drugs it’s only a matter of time. It’s not if you get caught it’s when you get caught because trust me when I say it, they are so ultra aggressive that these folks they’re definitely all over this,” said Chief Cruz.

GPD has even created an alcohol task force. Chief Cruz says the number one reported crime on Guam is driving under the influence of alcohol. They have also created a robbery task force. “We put this out there because we’re seeing again based on the data we’re collecting and that we’re gathering and that we’re analyzing is that robbery appears to be on an uptick. Whether it’s a game room, whether it’s a gas station that stays open for 24 hours a day, or a mom and pop store that gets robbed in the middle of the day, they’re out there,” said Chief Cruz.

Chief Cruz says the biggest challenge they face is getting the funding necessary to hire enough officers and purchase enough equipment and vehicles to properly police the island.