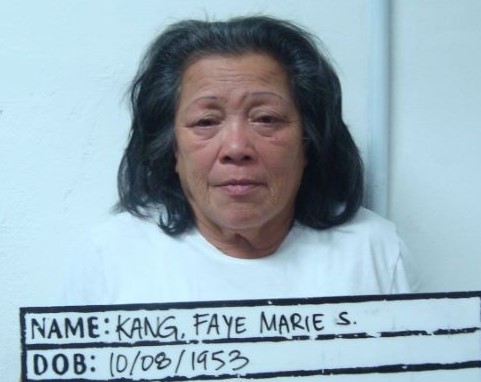 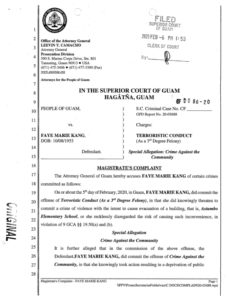 A 66-year-old woman has been arrested on allegations that she made a threatening phone call to Astumbo Elementary School Wednesday and threatened to shoot students.

Faye Marie Kang is being charged with terroristic conduct as a third-degree felony and a special allegation of committing a crime against the community.

According to the magistrate complaint, Kang called the school around 10 am yesterday and threatened to shoot Chuukese kids who she said were threatening her grandson.

Kang said she has complained about her grandson being bullied on a number of occasions but nothing was being done about it.

A lockdown was declared following the phone call and students were told to shelter in place. Police were called.

The school staff member who answered the phone told police that Kang said: “If anything happens to my grandson, I will go to the school and shoot each and every one of them who hurts my grandson.”

When police met with Kang, the complaint states that she denied threatening anyone but acknowledged that “in the heat of the moment, she speaks fast and sometimes says things she does not mean.”

Kang said she recalled saying “shooting” but “did not remember how she said it,” states the complaint.