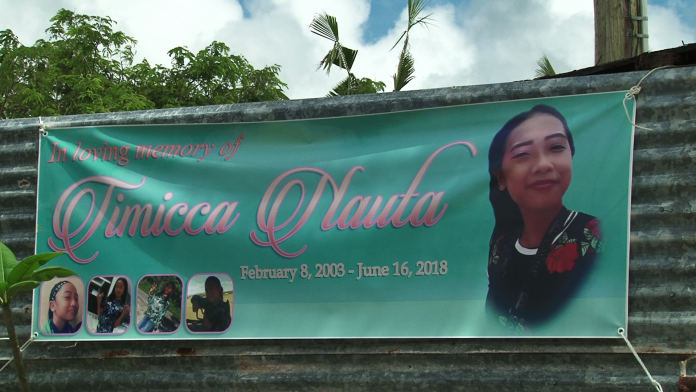 Guam – Was 15-year-old Timicca Natua murdered in cold blood? Or was it a burglary gone awry? A  look at the details of the gruesome murder may provide insight into a suspected killer’s motive.

Brandon Michael Acosta, 24, lives within walking distance to the house Nauta called home. To this day, the teenage girl’s family continues to be filled with grief at her senseless murder. They are now left with only the memory of a vibrant youth.

“She’s talented and I’ll tell you that coconut tree, she can climb it and get the coconut,” recalls Nauta’s great-grandmother Maria Gange. “She’s very friendly and respectful and she’s  a good girl.”

Gange tells PNC that the day before Nauta was discovered lifeless, the teenager assisted Gange’s son, who has a disability, to the store. “She is the only one that is available and willing to go,” she told us.

Nearly five months later, Acosta is in custody and authorities have provided a glimpse into Nauta’s tragic and untimely death.

According to court documents, the night before Nauta was found slain in her bedroom, the home directly across the street was burglarized. Over the course of four days, two other homes in the neighborhood were also burglarized.

Some of the items stolen from the homes were later found in Acosta’s possession. He was arrested four days after Nauta’s body was discovered and charged in those home burglaries.

While police say that Acosta admitted to his involvement in the thefts, it appears that authorities did not have anything on Acosta for Nauta’s murder just yet.

The evening Nauta was killed, Gange says she was home alone. There were no reports of any commotion or screaming, either.

“Until that morning when I heard the ambulance siren. I got up because sometimes my neighbor got hurt. I thought something with them. So when I went out there, I saw the police man, I asked what happened he told me its Timicca. She’s gone,” shares Gange. “Oh my God.”

Police say Acosta somehow gained entry into Nauta’s home but authorities wouldn’t learn about this until much later when two witnesses came forward telling police that he had confided in them.

The witness told police that Acosta had described the crime scene in such a way that only someone with first-hand knowledge could. Police also leanred that while Acosta was in jail for the string of burglaries, Acosta had told a fellow inmate that he killed Nauta.

Court documents state that Acosta told police he went into Nauta’s dark room, startling her. The victim was found on her bed in a kneeling position, leaning forward with her head facing toward the foot of the bed. Court documents describe a gruesome scene with blood trails across the walls of the bedroom all leading back to where Nauta lay slain.

The 15-year-old had been executed with a sharp blade—five lacerations were reportedly discovered on her body. Chief Medical Examiner Dr. Aurelio Espinola noted lacerations on the left side of Nauta’s face, behind her left ear, the left side of her neck, her left index finger and her right shoulder blade.

The cut to her left index finger may be an indicator that Nauta fought until her last moments.

But why did Acosta allegedly murder the teenager in cold blood? Court documents state that Acosta explained his addiction to methamphetamine and said that he usually wouldn’t commit burglaries but that when he uses methamphetamine, he does things “he woudn’t otherwise do.”

Could this be the reason for Nauta’s death and was it fueled by an addiction to ice? Was her murder a burglary gone awry? According to court documents, Acosta claimed killed Nauta was not his intention and that he merely “made a mistake.”

“As a human being, I don’t feel very good about it. He has already confessed his involvement in it. It’s good that the boy really confessed instead of just—imagine almost five months—that he confessed but that’s a long time to make us wait to know that somebody has done it,” says Gange.

Acosta was formally charged with home invasion over the weekend. The charge for murder was dismissed because of a typographical error on the Attorney General’s Office’s part in which the word “recklessly” was used instead of “intentionally and premeditatively” to describe how Acosta caused the death of Nauta.

The prosecution has indicated that it intends to correct the error. Magistrate Judge Jonathan Quan dismissed the murder charge without prejudice which means the AG’s Office can charge Acosta with murder in the future. The prosecution’s request for a $1 million bail was denied. Defense Attorney Karlo Dizon sought a $10,000 bail, but Judge Quan imposed a $300,000 cash bail instead.

But whether or not Acosta is found guilty in the future, and even with the prospect of a lifetime behind bars, he appeared unfazed by the charges. According to police, after confessing to the crime, Acosta said he prayed and now “believes his spirit has been set free since he confessed to his sins.”

“Even if we don’t forgive him, he has done the thing already and that’s very terrible, especially the way how he did it to my granddaughter. It’s terrible,” says Gange.