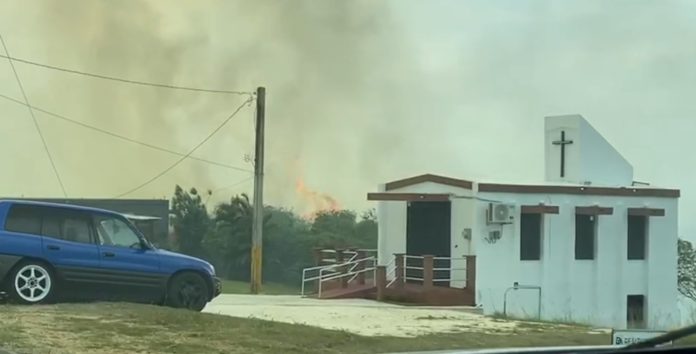 The Guam Police Department Monday afternoon closed both lanes of traffic on the Cross Island Road due to a large grass fire.

The lanes have since been reopened.

The fire was near the Calvo’s Chapel on Route 17. Sgt. Paul Tapao reports that due to the size of the fire, the road had been closed from Rt.17 by former raceway.

Motorists were asked to seek alternative routes as they would not be permitted to proceed by the designated traffic control point.

GFD spokesman Kevin Reilly reported that the fire extends from J. Kindo Street to the Calvo Chapel and behind GRESCO.

GFD and Navy Fire units along with a chopper from Helicopter Sea Combat Squadron 25 had been called in. And a tanker from the Andersen AFB fire department was also assisting.

By 7 p.m., roads on across Island Road were opened for normal operations after clearance by GFD.

The Guam Fire Department has announced the closure of Route 17, the Cross Island Road, by the Calvo Chapel as fire crews from GFD and the Navy battle a grass fire in the area. https://t.co/FGq32JRA09