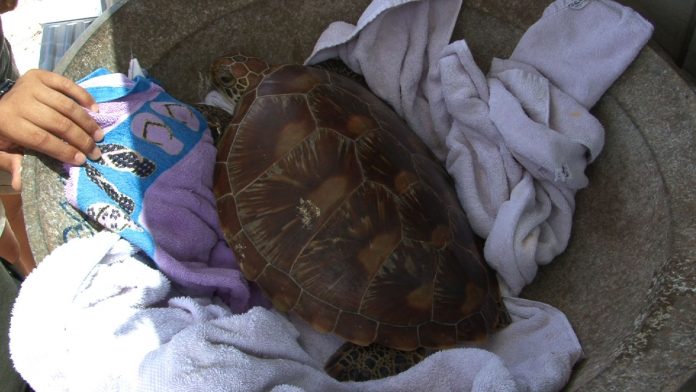 The discovery of the turtle was a result of a search warrant for the home.

Guam – After it was nursed back to health, a green sea turtle was released into the wild earlier today at Family Beach.

According to the Department of Agriculture, they received a call about a green sea turtle found behind a residence in Agat on Monday. When conservation officers arrived on the scene, they found the turtle being kept inside a plastic tub filled with fresh water. The turtle was then taken to the Underwater World in Tumon for recovery and rehabilitation. After a few days, the turtle’s condition was deemed healthy enough for the turtle to be released into the wild. This morning, conservation officers and marine biologists watched as the turtle was released into the waters on Family Beach.

Department of Agriculture Conservation Officer Chuck Flores says, “If they see anybody catching turtles stranded on the shore, give us a call at the Department of Agriculture. That’s 688-3297. Give us a call and we’ll have our conservation officer they’ll come out there and evaluate the animal. We’ll see if we need to take it to Underwater World for recovery or if the animal is just doing its normal thing. We don’t want anybody touching the animal or harassing the animal so we don’t want them doing that.”

Flores explains that if residents ever come across an animal in need of help, report it to the Department of Agriculture by calling 688-3297.