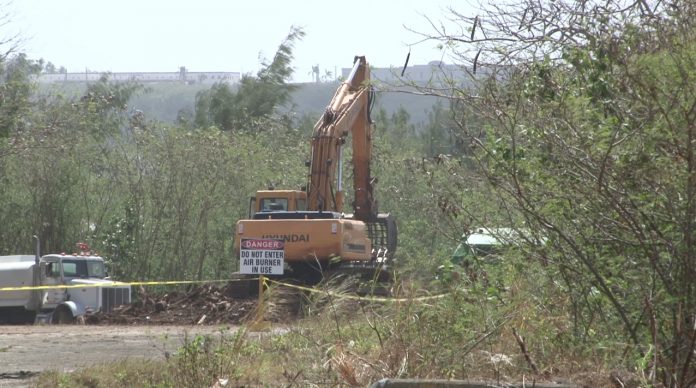 Numerous residents have voiced concerns over the fumes and how the process of disposal of green waste leftover from typhoon dolphin is currently handled.

Guam – In the past week, numerous residents in Tamuning have complained about the invasive ash from the disposal of green waste at Oka Point. New questions have been raised over whether or not the company contracted to complete the job is properly burning the waste.

Numerous residents have voiced concerns over the fumes and how the process of disposal of green waste leftover from typhoon dolphin is currently handled. One resident emailed PNC pictured of his car covered in what appears to be some sort of residue. Other residents have called in to K57 to complain of smoke from the burning. When companies burn green waste, specifically in this case, they use a burn box, which is not supposed to give off any noticeable smoke.

“Each time they opened up the burner, the burn box to load naturally some smoke is going to be released, it was actually sprinkling when i was there so when the rain started getting into the burn box that immediately caused an evaporation type of process well steam essentially,” said Palacios.

Palacios says, when he was on site this morning the burn box was translucent and not giving off any sign of smoke. He says in the case of yesterday….but there’s also the case of whether or not the company contracted to dispose of the waste, Pacific Unlimited, is doing it correctly. Some are concerned that dirt and other things besides green waste was being mixed into the burner.

“They have a huge backhoe with like a filter or a bucket. And as it scoops up waste before it actually dumps it into the burner it actually vibrates and shakes, and anything that’s not supposed to be burned will drop off through the screen,” said Palacios.

Palacios says the contractor is doing things to minimize resident harm such as spraying water on the ground to minimize dust. Palacios recognizes that the burning is being done very close to resident housing and says it is a bad location to position the burn box. So why not move the burning further away if it is acknowledged to affect the nearby houses?

“The fire department recommended that that burn box be placed at that exact location, for a couple of reasons, number one human safety,” said Palacios.

According to Palacios, GFD was worried that any other spot could cause a wildfire because of high vegetation.

The contractor told Palacios that they should be done burning by tomorrow.