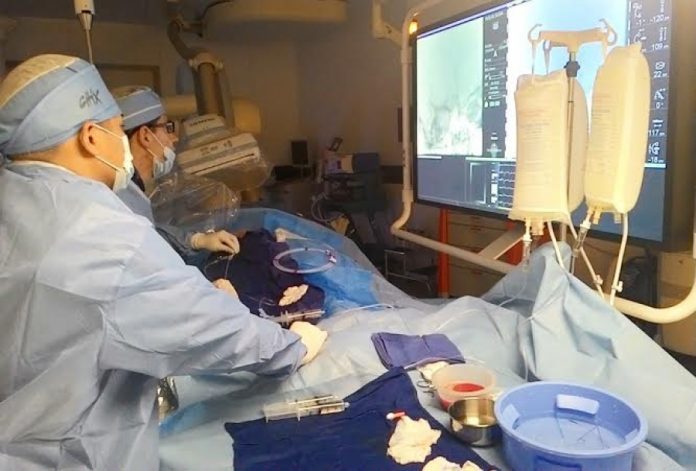 GRMC is the only hospital in the Marianas equipped with life-saving technology to remove blood clots in stroke patients.

Guam – A new campaign is aiming to bring attention to stroke awareness here on Guam.

Launched this month by the Guam Regional Medical City, the hospital is leading the way in stroke awareness as they are the only hospital on Guam equipped to properly remove blood clots that cause strokes.

GRMC became the first hospital to offer this kind of stroke treatment and intervention in the Mariana region when they opened their doors in 2015. The treatment is performed through a low-invasive procedure called an endovascular thrombectomy.

No other medical institution or hospital offers this service on Guam and, in fact, GRMC Chief Medical Officer Dr. Felix Cabrera says in addition to patients who’ve come directly through their doors, they’ve also treated patients who were transferred from the Guam Memorial Hospital and Naval Hospital.

“What we’ll be launching is a campaign throughout the month of March where we focus on stroke awareness throughout the whole region, actually, not just on Guam, and understanding that time is brain and in these cases, these patients have to be really directed to GRMC because we are the only hospital that has the capability of intervening within the time window that’s necessary and this is to save lives, to prevent death and also to prevent permanent disability,” said Dr. Cabrera.

Dr. Cabrera emphasizes that stroke awareness starts at home. The easiest way to remember the signs and symptoms of a stroke is through the acronym F.A.S.T. which stands for Facial drooping, Arm weakness, Slurred speech, Time to call 911.

“So there has been already this cooperation, this partnership but the awareness, because stroke awareness starts at home, starts at the community and not necessarily with the patient because it’s the patient that’s suffering that usually can’t communicate what’s going on. So understanding that there’s a facial droopiness, or this arm, one side arm weakness or inability to speak that happens suddenly, those three, two or three of those symptoms together should be recognized as an acute stroke,” Dr. Cabrera noted.

Although GRMC has promoted stroke awareness in the past, Dr. Cabrera says they’ve seen recent multiple cases that highlighted the lack of general knowledge in the community. GRMC hopes this campaign will make a greater impact in the community to help save lives.