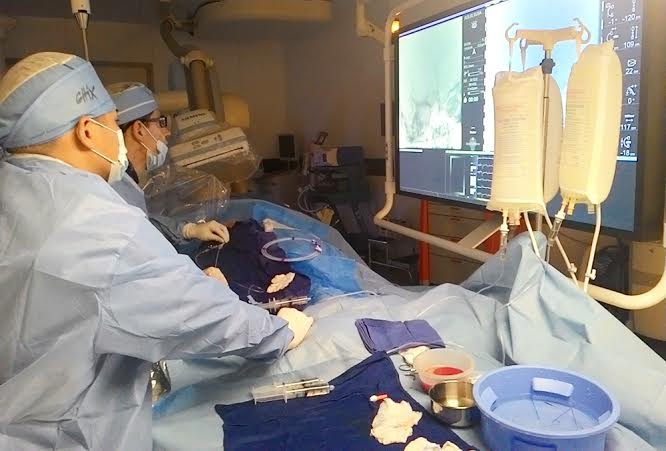 “This is the first endovascular stroke program in the region in Guam or in the Western Pacific. We started the program in late January early February of 2016,” said Dr. Shay.

This cutting edge procedure just recently saved the life of 66 year old Elisa Acejo who was rushed to the Guam Regional medical city a few weeks ago after she had a stroke at the Dededo community center. “In this particular case the woman had a full neurological recovery she had complete motor function on her left side of her body, mild facial droop it’s probably gonna get better and a minimal slurred speech which is also gonna get better. So she went from being someone who’d be in a dependent state to an independent walking talking individual,” said Dr. Shay.

Dr. Shay says it only took about two hours from the time Acejo arrived to the hospital to the time the surgery was completed. She spent one night in the ICU for observation and was discharged from the hospital just a few days later. this was the key to her successful recovery, being brought in immediately and being treated so quickly. “It’s FAST F-A-S-T. If there’s a facial droop, arm weakness, speech changes, t stands for time, time is brain so you’ve gotta seek immediate medical attention,” said Dr. Shay.

The procedure that was done is called an endovascular thrombectomy. It involves entering the body with a catheter through an artery in the leg. The catheter is then guided by the doctor all the way up to the brain where a stint can be placed in the artery and the clot removed restoring blood flow to the brain.

“The hospital designed a room that is state of the art. We have the technology that will allow us to safely access peripheral arteries and crawl through the body up to the brain and ultimately remove clot,” said Dr. Shay adding, “We’re here 24/7, 365 we’re functioning like a comprehensive stroke center so there’s never gonna be a time when you’re gonna be turned away and like I said we’re the only game in town.”

This is the first time that this procedure has ever been done on Guam and Dr. Shay says the GRMC is the only hospital in the region offering this stroke treatment procedure.