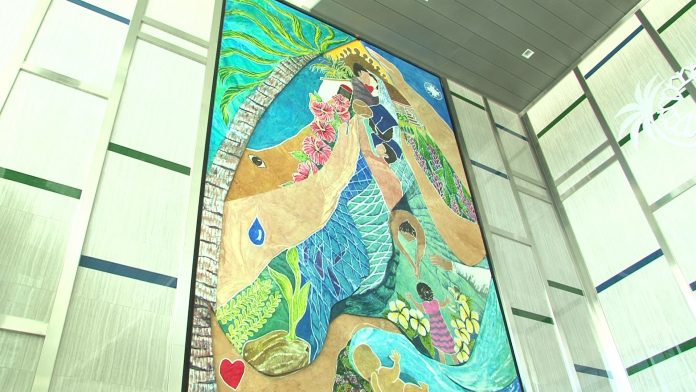 Guam – After several delays and missed target opening dates, the Guam Regional Medical City, the island’s first and only private hospital, has finally opened its doors.

A blessing ceremony was held this morning to mark the momentous occasion, as GRMC CEO Margaret Bengzon gave opening remarks to dozens of employees who filled the hospital’s lobby.

“So this facility, grand as it is, great as it, expensive as it is, is really just a shell without the single most valuable resource of the Guam Regional Medical City, and that’s us. That’s the organization–420 strong and growing,” announced Bengzon.

GRMC saw its very first patient today. They’ll continue to operate under clinic hours until next week Tuesday, July 7, when they will expand their services to include in-patient elective care.

“So patients can call in, their doctors can call in to schedule admissions. Emergency services will come in maybe a week and a half to two weeks after,” Bengzon tells PNC.

Bengzon acknowledges the many delays and challenges the hospital faced in finally opening their doors. One of the biggest challenges was in maintaining their budget.

“The project is over budget from the original budget. But that’s really more because we ended up with a better hospital. There were certain services that we weren’t intending to put in at the beginning that we opted based on engaging with the community and appreciation of the community of the need for these services that we’ve decided to put in,” Bengzon says.

GRMC had projected to spend $220 million to build the hospital. To date, Bengzon says GRMC’s budget overrun is about $20 million, or about a 10 percent increase for their initial budget.

You can learn more about the services they offer at their website grmc.gu.