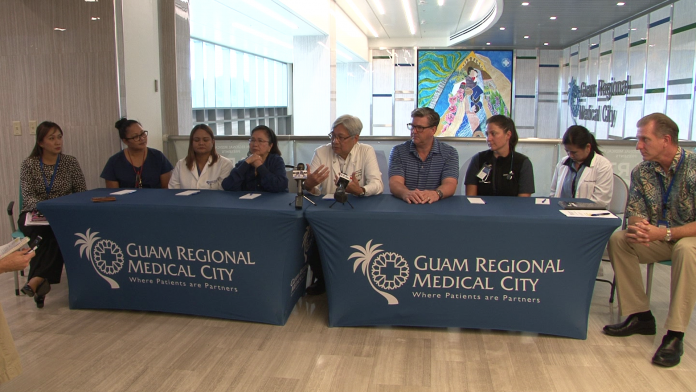 Guam – It’s been nearly three years since a successful open heart surgery was performed right here on island at the Guam Regional Medical City but because of lacking resources, the program came to a screeching halt.

Well just last week, GRMC’s Open Heart program, spearheaded by Guam son Dr. Noel Concepcion, has been revived thanks to the hard work and dedication of community partners, including the Guam Memorial Hospital and local physicians.

It was a big deal in 2015. GRMC had just open its doors six months earlier and, with Guam-raised cardiothoracic surgeon Dr. Noel Concepcion in the lead, an open heart program began beating.

But the fully functioning program quickly died as the hospital began to face huge obstacles. First, they lost many of their specialized nurses who came to Guam through the H-2B program. That set off a chain reaction, causing a shortage in nurses, then beds and even to some degree, entire floors or wards to temporarily shut down or fail to open along with the rest of the hospital. But in those three years of back-to-back challenges, the work continued.

While Dr. Concepcion was back in Modesto, California where he has been practicing for years, GRMC continued to nurture its open heart program. Finally, this year, they decided bring the program back life, albeit through a training cohort.

“We thought it’s safest for patient care to have sort of a combined team where we bring in nurses and personnel from Modesto and just work alongside the GRMC nurses who actually have shown a significant degree of development and preparation for this so it’s been a lot easier now than it was in 2015; obviously the hospital is busier,” says Dr. Concepcion.

Last week, with the Modesto cardiac team in tow, Dr. Concepcion and a team of GRMC nurses were able to perform four successful open heart surgeries. As of yesterday, two were discharged. The patients ranged in age from 52 to 75 and all presented with chest pains. Dr. Concepcion says assessments were done and all four patients were deemed eligible and safe to undergo open heart or bypass surgery. In fact, Dr. Concepcion says they ran into some complications with one patient.

“One lady has had a few issues but even that is, the fact that we were able to rescue her, is a testimony to the team,” he notes.

The Modesto team heads back to California soon but will be returning to Guam once a month beginning in October to train the GRMC nurses.

“We had great support from, as Dr. Concepcion mentioned, GMH. Ms. Belle Rada, who has been working with him for years at GMH, was kinda helping with Dr. Koo and Dr. Jim Bartholomew, the interventional cardiologist over at GMH, to send over referrals that need it. Dr. Inaba, also in the community, sending over patients for review. So it’s really a community effort amongst all the providers with us being the lead on the open heart program. But those other cardiologists and interventional cardiologists, we need their support and their pipeline of patients so we can hopefully keep these patients on island for these surgeries and not have to go off,” explains Plinske.