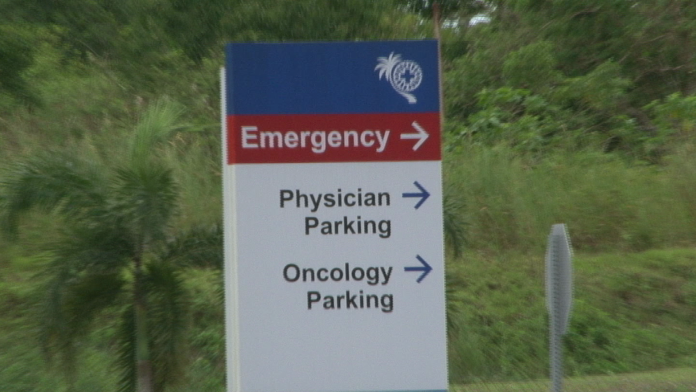 Guam – Fortunately, no lives were lost and there were no major injuries reported as a result of Typhoon Mangkhut but it is worthy to note that coverage for the entire island’s emergency public health needs were met behind the scenes through partnerships among our three major hospitals.

We’re now learning that the Guam Regional Medical City was the only hospital on island able to take emergencies by ambulance at the peak of and in the immediate aftermath of the storm.

Hospital and emergency care availability is of utmost importance during any storm as injuries and casualties can and do happen. But what happens when a hospital is no longer able to take in emergency patients? Fortunately the island did not face this problem during Typhoon Mangkhut. But we have learned that emergency services were somewhat limited.

During the peak of Typhoon Mangkhut’s landfall on Guam and in the immediate aftermath, there was only one hospital able to safely accommodate ambulance patients, the Guam Regional Medical City.

“Naval went on a complete diversion because they said they closed their gate to anyone coming in and they also were not sending out any ambulances to pick anyone up. [Guam Memorial Hospital] evidently went on to a diversion due to a CT scanner, I think, was down and possibly because of elevators being down and rain and water throughout the building, creating an unsafe transportation system for patients within the hospital. So we were the only hospital that was fully open to all comers for most of [condition of readiness] 1,” explains GRMC Vice President of Corporate Affairs Eric Plinske.

COR 1 is a declaration made by the governor indicating that damaging winds are occurring or expected within 12 hours.

This meant that during the diversion period, the Guam Fire Department was on strict orders to send anyone needing emergency transport via ambulance directly to GRMC.

“Without [GMH] elevators, they wouldn’t be able to bring patients up, so that would easily saturate their [emergency department] and I think that’s what they were trying to do is maintain the patients in an ED holding pattern because even–normally when your elevators are down you’ll go to a patient transport system where they’ll use special equipment to [transport] patients off the stairwell. Well if your stairwell and the hallways are flooded with water that also is a very unsafe,” he added.

Although only a few patients came through GRMC’s emergency room via ambulance during the storm, Chief Medical Officer Dr. Felix Cabrera says it’s difficult to tell if any of them were diverted.

“The standing order with GFD at that point was that all ambulance transport goes to GRMC so there was no inquiry on what hospital they would prefer,” he says.

He also says that the hospital saw an influx of patients after the storm. A typical busy day for GRMC is 40 patients in a 24 hour period coming through its emergency room. On Tuesday, after winds died down, they saw 65 patients in a 12 hour period alone.

“Once the COR 4 was declared at noon, everybody started flooding in by ambulance,” he notes, adding they had about 11 ambulance patients that day. Dr. Cabrera says some of those patients were treated for minor injuries related to pre-storm preparation and post-storm cleanup.

While the diversion of ambulance patients went off without a hitch, Plinske says it was a community effort through a strong partnership with GMH and Naval Hospital that made it possible. And to be clear, diversion does not mean the hospitals were turning patients away.

“Patients could have still presented to GMH but that’s by private vehicle. So they weren’t gonna turn away patients that did present to GMH. I wanna make that clear that GMH was not turning away patients; that it was basically a diversion in terms of those who needed emergency transport,” emphasized Dr. Cabrera.

In fact, GRMC says they too experienced some minor facility and structural damage like water seeping in through some windows. GRMC says they are now assessing any possible damage and will work on improving their facilities for future storms or disasters.