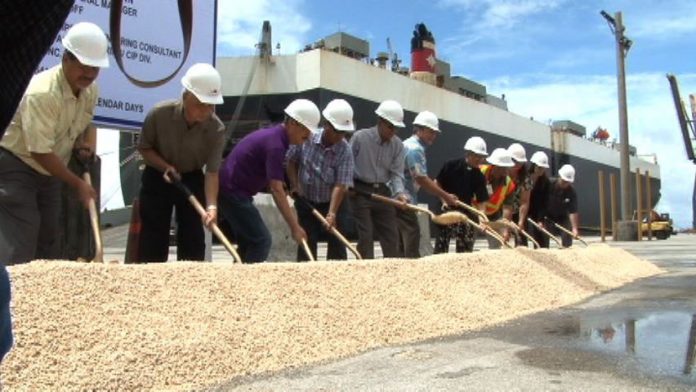 Port Wharf to be Repaired

The Port Authority of Guam’s commercial cargo port has not seen major capital improvements since 1969. Over the years due to earthquakes and regular aging the wharf’s concrete-pile-supported concrete deck structure has received significant damage including concrete delamination, spalls, and cracks. Surface cracks have even been observed on the deck. The steel sheet pile bulkhead walls of the cargo berths, the storm water outfall pipe connections and the fender units all have damage as well. The wharf improvements will fix all of this damage at a cost of $5 million dollars funded through Bank of Guam financing.

Governor Calvo says these improvements at the port send a strong message to the federal government and particularly the U.S. senate that Guam is committed to preparing for the Guam military buildup. “We’re looking at about $25 million dollars probably even a little bit more than that in local funding for improvements for this facility. It’s good for the people of Guam but it’s integral also in showing our commitment to the federal government and those folks in the senate and the congress that yes the people of Guam are putting their money where their mouth is,” said Governor Calvo. The contractor for the wharf improvement project is B.M.E. & sons. They anticipate completion by September of 2015.