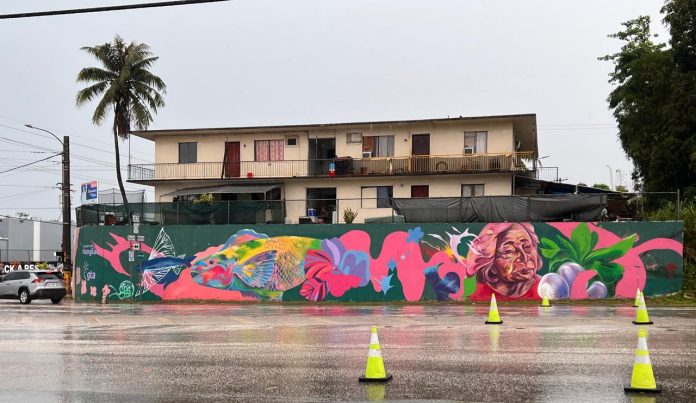 This morning, GTA celebrated the completion of its most recent project in Mangilao– a mural by local artist Joshua Barrigada.

PNC’s Destiny Cruz has this story

This mural is the second of more to come, which seeks to apply GTA’s slogan, “we start with you,” at the village level, as the company plans to collaborate with Guam’s local talent to create a mural in each village, reflective of the spirit, value, and culture in the individual communities.

PNC spoke with artist Joshua Barrigada, who highlighted beloved techa Maria Quitugua, more commonly known as “Mama Tita,” as one of the focal points of the Mangilao mural, who embodies the meaning of a pillar of one’s community and leans into the broader meaning behind the art piece.

Barrigada said, “She’s given most of her life and sacrificed so much for the community– and then so when I was trying to come up with the rest of the mural, I wanted a second vocal point that kind of brought home the same concept right? So, we thought about doing a parrot fish– the parrot fish takes care of the reef, the parrot fish cleans the reef– and it’s like basically a caretaker of its community kind of like.”

The project’s unveiling garnered the presence of both Mama Tita’s daughter and granddaughter, the Mayor and Vice Mayor of Mangilao, Allan Ungacta and Kevin Delgado, and GTA’s staff– all of whom shared a part in the mural’s creation.

Furthermore, as Guam’s community can look forward to more projects like this, GTA’s Vice President of Marketing, Nate Denight, shared the significance of the company getting involved with Guam’s community.

Denight said, “GTA is really–we’re a local company, we’re truly local, and we really wanna get involved with our local community, and this mural project is a great way to do that. We’re in the village– our slogan is, “We start with you,” and we wanted to take that slogan and localize it to the village level–Supporting local artists as well as highlighting the pride of the village within the art–within the murals is a great way to support our community.”