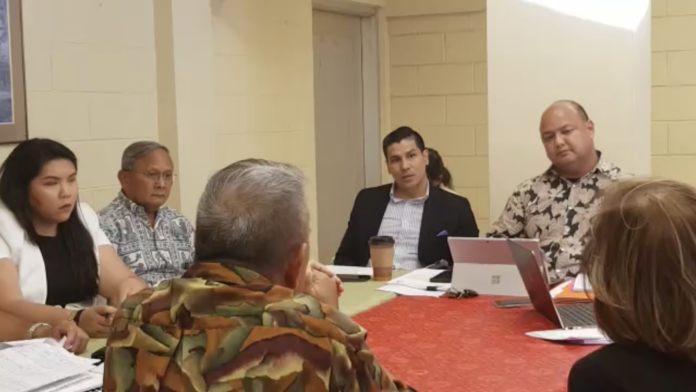 Guam – At an emergency working session today to discuss the eviction notice sent to Guahan Academy Charter School, stakeholders faced the harsh reality that GACS students may not be able to report to their Tiyan campus as early as Wednesday.

After hours of discussions and to save GACS from closure, the Guahan Charter Schools Council said they would explore the possibility of holding double session which could force nearly 300 middle and high school students to share a campus with the GACS elementary school.

The eviction notice was sent from Attorney Daniel Berman’s office which represents Nan Chul Shin Trust, the owners of the property being leased by Guahan Academy. If it happens, the eviction will occur on Wednesday. GACS is behind in payments by nearly $250,000.

The notice was sent to GACS Board Chairperson Fe Valencia-Ovalles on February 7, which PNC Reporter Jolene Toves, speaking in her capacity as the GACS PTO President, says was the day before a PTO meeting. She spoke with K57’s Patti Arroyo this morning and stated there was no indication given at that meeting that an eviction was even a possibility.

“At the PTO Meeting, a concerned parent did ask what the fate of the charter school is. It was not addressed and we were not told that GACS was facing eviction. We were basically told that the school was doing what they could with the funding that they had,” said Toves.

In fact, in audio from that meeting, Dean of GACS middle and high schools, Mary Mafnas, addressed next year’s budget, giving no hints that the two upper schools may be shut down.

“Next school year, my understanding, if I’m correct, and Leah and correct me if I’m wrong, the Council said, ‘Okay. We’ll recommend to the legislature that you can have 873 students and you’ll be $6,500 unless they cut it.’ But 873 students at $6,500 for next school year. That’s what we hear right now,” Mafnas can be heard saying during the last PTO meeting.

So the news took Toves, other parents and students by surprise when it was posted on social media over the weekend. Toves sprung into action, urging Blas to hold the emergency working session. She says in addition to the eviction notice, they also need to address the collateral damage.

“It’s Monday and school’s supposed to be shut down on Wednesday. What are we supposed to tell our kids? ‘Sorry, you’re not going to get enough credit to graduate because the school shut down?’ or ‘Sorry we have to disenroll you from GACS and put you somewhere else?'”

Meantime, the Guam Department of Education has released a statement saying that in the event the eviction does take place, the department will work with students and families to ensure a smooth transition should they decide to re-enroll at GDOE.

At the meeting, Guahan Charter Council Chairwoman Amanda Blas informed GACS Board Chairwoman Faye Ovalles that they expect to receive the Shin Trust Contract, the latest Bank of Guam loan commitment, and the most recent USDA loan commitment by tomorrow with an official letter.