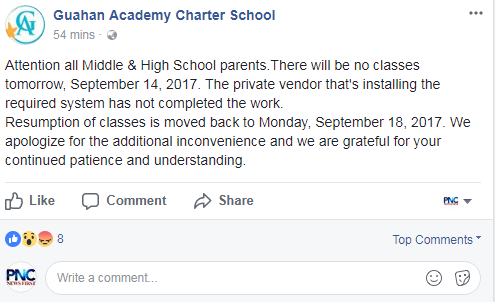 No classes for middle and high school students tomorrow! Instead, classes are slated for Monday, September 18, 2017.

Guam – Concerned parents of middle and high school students attending Guahan Academy Charter School will have to wait yet again for school to continue next week.

Classes have been pushed back for the fourth time due to a myriad of issues.

During a work session with the Department of Education this morning, Superintendent Jon Fernandez pressed GACS Trustees for a definitive date.

“At some point, I’m going to have to tell the parents and students that school is going to be open or not open, because there is usually a time frame where we want to make sure where parents can plan for their kids…I have a nephew who wants to attend Guahan Academy but he’s been spending his time waiting for it to open. So, I want to know if I have to tell my relative if it’s going to be open tomorrow,” Fernandez asked.

Although GACS administrators promised parents that they would reopen tomorrow, GACS trustees could not give their full confidence in the start date.

According to Marilyn Manibusan, the Board of Trustee consultant for the charter school, GACS’s vendor Falcon Fire is still finishing last minute services to the facility.

Although the renovations are slated for completion tomorrow, GACS has to await clearance from both the Guam Fire Department and the Department of Public Works for an occupancy permit –something that could hinder tomorrow’s scheduled re-opening.

Students officially began classes last week, but their instructional day was cut short due to low water pressure in the facility. It was later announced that the school did not even have an occupancy permit to open in the first place. The school has remained closed since then.

To date, GACS is already behind 11 instructional days. In order to make up the school days missed, administrators announced that they plan to utilize parent-teacher conference days, teacher work sessions, and even students’ Christmas break.

And amidst all the issues already plaguing the school, there’s now an enrollment issue.

Each charter schools’ local funding is capped at 740 students. But GACS has 1,015 enrolled for the year.

“When that charter was approved in 2010, our student enrollment plan was also approved,” argued Manibusan. She continued: “GACS has been in compliance with that student program, so 1,115 is not a number that has come out of nowhere,” she quipped.

But that number did in fact, catch the superintendent off guard.

“Typically, we wait until [the legislature] appropriates money before we enter into obligations,” the superintendent explained.

And there’s another wrinkle: if GACS doesn’t acquire and maintain all 1,015 students, they might not be able to pay for their new facilities. That’s because GACS admitted today in their work session that they intentionally recruited more students in order to pay for their new building.

But what will this mean for students enrolled past the 740 cap?

“It will not affect the students,” wagered Joseph Limtiaco Cabana, GACS’s Finance Officer. “We just have to find other means of getting the funding,” he said.

Unfortunately, that source of funding has yet to be identified.

“Right now, we are looking into what we can do to find some sources of funding. We don’t have it readily available, but it will be in our budget once more. We are also working with GDOE to be able to see how much, to be able to provide us with an additional source of funding,” the finance officer said.

But these are issues GACS will have to address down the road and at the very least, not until they finally re-open their doors.

Guahan Academy posted on their social media page late this afternoon that there will be no classes tomorrow.

Instead, classes are tentatively scheduled for Monday September 18. GACS is encouraging stakeholders to attend their PTO meeting tomorrow at 6 pm in their elementary campus cafeteria to express any and all concerns.