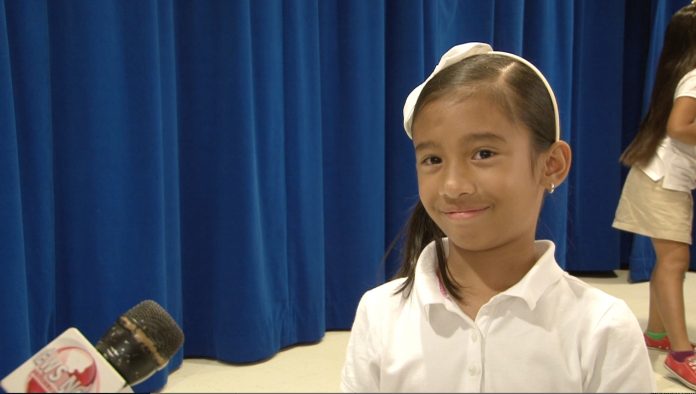 Nina is a third grader at McCool elementary and Middle School.

Guam – With her artwork going to be featured stateside and across the world, Barigåda native Nina Taitano is the winner of the armed services YMCA Art and Essay contest.

Taitano is in third grade at McCool elementary and middle school. Her piece of art took home first place after beating out artwork from around the world. The picture depicts Nina with her Auntie Mary Taitano, who is in the National Guard. President and CEO of the Armed Services YMCA, Vice Admiral (ret.) William D. French presented Nina with an iPod touch for winning the contest. This years art and essay contest was themed “my military family” and is officially launched every November. According to Vice Admiral French, the Armed Services YMCA (ASYMCA) provides junior military members with before and after school care and spouse employment programs to name a few. French is also a former rear admiral for the Joint Regions Marianas. Nina’s artwork will be on displayed at 34 ASYMCA locations and military bases around the world.

When asked about her artwork, Nina said, “my auntie goes on a very long deployment and sometimes when we have special family stuff she’s not there and I miss her very much and sometimes when we get together, its a big party and I just like to spend time with her, she’s a nice auntie and I’m very lucky to have her in my family, and I just decided to draw something that we could all enjoy.”