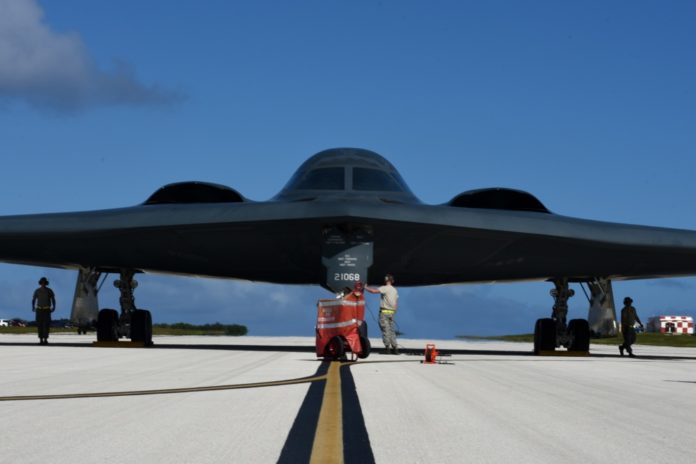 Washington, D.C. – Guam is again the focus of national attention for security issues, with the deployment on island of three stealth B-2 Spirit bombers.

The Washington Post highlights the deployment of Air Force stealth bombers to Guam as talks commence between North and South Korea involving the Winter Olympics.

The Air Force claims the movement of three bat-winged B-2s and 200 airmen to Andersen Air Force Base from Whiteman Air Force Base in Missouri was already scheduled, though the Post reports it comes at a “sensitive time.”

The planes have stealth technology and the ability to carry nuclear weapons which the Post writes is something the B-1B Lancer bombers deployed to Guam last year do not have.

The B-2s are the only aircraft that can drop a relatively new conventional 30,000 pound bomb designed to pierce hardened bunkers and tunnels such as the ones in North Korea.

The deployment again highlights Guam’s strategic role as the “tip of the spear” in the Pacific theater and its importance for the realignment of U.S. Marines in the region.

Marine Lt. General Kenneth McKenzie Jr., the Pentagon’s Joint Staff director, told reporters that it would be wrong, however, to view the bomber deployment to Guam “within the single lens” of the Korean Peninsula. He said it affects allies across the Pacific.

Asked if the U.S. is also sending a message to China by sending stealth bombers to Guam, McKenzie said, “We send a signal to everyone” when the Pentagon moves bombers across the globe.