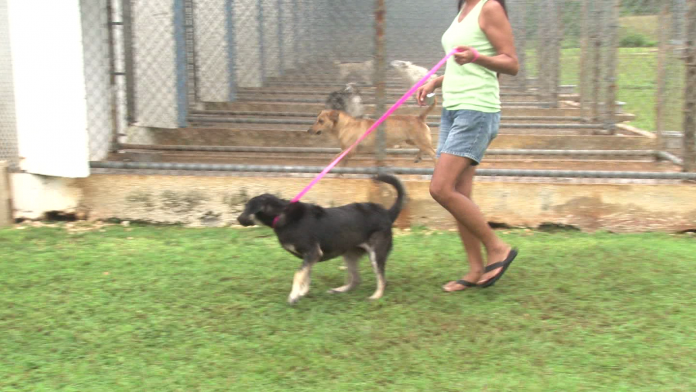 Guam – Our island may have been rabies free for the last 50 years but don’t get too comfortable with that fact and brush off our stray animal problem. In fact, Guam Animals In Need warns that a large stray animal population, like the one on Guam, is exactly the kind of recipe that could get us in trouble down the road.

“It’s actually one of the deadliest viruses known to man. It has a 100 percent mortality rate. iIf you contract rabies and show symptoms, you die 100 percent of the time. It actually has a higher mortality rate than ebola,” says GAIN President Cyrus Luhr who was the guest speaker at the Rotary Club of Tumon Bay Tuesday.

So what did the island do to eradicate the deadly disease?

“The only way that we’re able to solve it in 1967 was through a two-year quarantine of the island. No animals were allowed on or off the island and widespread culling so this very poisonous white powdery [substance] spread around the island, owned and unowned dogs, both ate it up and about 15,000 died within six months–dogs and cats,” explains Luhr.

The island has been fortunate to have avoided rabies over the last 50 years and for most residents, the ’67 outbreak is a lost memory. Current quarantine laws seem to be working.

But Luhr warns that stringent quarantine laws aren’t always enough. Case in point: Bali, Indonesia–a beautiful, tropical island tourist destination, much like Guam, popular for its pristine beaches and laid back lifestyle. But one that also suffers from a stray animal problem.

“In Bali, we like to point out, it was rabies free up until 2011. They had rabies introduced and suddenly they had about 125 deaths in the first year and a half,” Luhr notes.

So what does a feral dog and cat problem have to do with the spread of rabies? Control. And, as GAIN suspects, pet smuggling.

“We know that there are constantly boats coming back and forth to Guam with the animals that are not being 100 percent checked,” Luhr says. “We know that there are animals coming from the [Philippines] to Guam and they have a huge, huge rabies problem in the Philippines. And veterinarians, every year, there’s at least, an average, 10 or more veterinarians dying in the Philippines from rabies.”

Any sign of rabies on the island and Guam’s tourism economy could take a hit, warns Luhr. When the Bali rabies outbreak happened, tourists were warned by their respective governments not to travel to Bali.

But rabies-free or not, Luhr says studies show a feral dog population does affect tourism. Take Western Samoa, for example, where an outgoing survey was performed for tourists.

“Fifty-five percent of respondents said that they felt sorry for the dogs when they were on island; 65 percent said that seeing the stray animals … made their vacation worse and 35 percent, and not just a little bit worse, but 35 percent of people said it had a medium to high impact on their vacation,” explains Luhr.