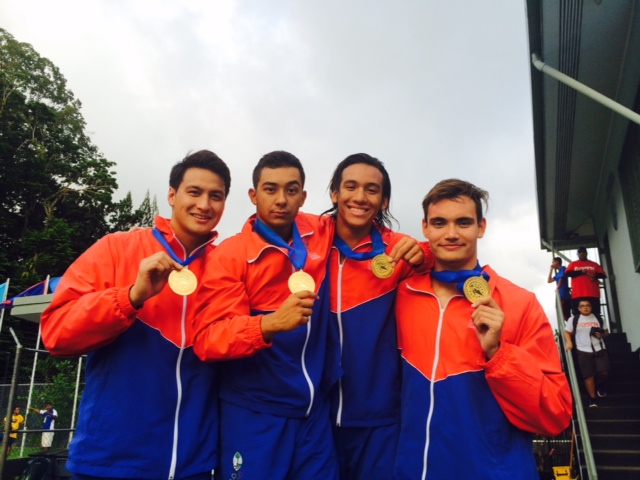 Pohnpei, FSM – Led by Olympians Christopher Duenas, Benjamin Shulte and Pilar Shimizu, Guam swimmers dominated the pool events collecting 10 gold, 8 silver and 3 bronze medals on day one of the 8th Micronesian Games being contested in Pohnpei, FSM.  Guam medalled in every event winning gold and silver in seven of the twelve events.

The 1-2 attack began with Shulte and Tommy Imazu in the 1500m men’s freestyle followed by Jagger Stephens edging Shulte in the 100m men’s freestyle. Although the women were unable to deliver the 1-2 finish, Shimizu continued the golden harvest in the women’s 100m freestyle as Shulte and Tanner Poppe added another 1-2 finish in the men’s 200m breaststroke.  The first place streak took a short break as Chasmyn Quinata finished second in the 200m women’s breaststroke. Thereafter, Stephens outpaced the pack in the 100m men’s backstroke with Alejandro Atoigue finishing in second.  12 year old Madison Packbier surprised the field winning bronze in the women’s 100m backstroke.

[Photo: The Guam Men’s swimming team shows their Gold medals in the 4×100. From left to right is Christopher Duenas, Alejandro Atoigue, Jagger Stephens and Benjamin Shulte.]

Gold and silver continued to pour in the next three races with Shulte and Imazu’s performance in the 200 men’s individual medley, Shimizu and Lorilei Poppe in the 200 women’s individual medley and an exciting 1-2 finish as Duenas edged out Stephens in the 50m men’s butterfly while Mineri Gomez earned bronze in the women’s 50m butterfly.  The men’s 4 x 100m medley relay dominated from the get go as Shulte led the charge followed by Stephens, Atoigue and anchor Duenas completed the course with each team still having one more swimmer left on the podium.  The women’s team of Taloani Atoigue, Shimizu, Poppe and Gomez took home the last gold of the day by more than 25m.

Underwater Fishing’s Ray Flores speared his way to 49 pounds of catch to claim the silver medal in the shark infested spear fishing competition held at the Mangrove Bay.  The team set out at 8:00 a.m. and returned to the dock at 2:00 p.m. where weigh in was conducted. Medal presentation for this event will be held at 2:30 p.m. Pohnpei time.

Men’s volleyball won 25-16, 25-15, 25-14 against Nauru while the women battled through five sets before beating Palau.  On the hard court, men’s basketball dribbled past Marshall Islands 97-63.  Women’s softball survived a scare turning in three runs in the extra inning to beat host Pohnpei 6-3.  The diamond turned luster as the only setback came at the hands of Kosrae’s JR Joe with a 7-4 defeat.

Day 2 events will see the swimmers try to repeat their dominance as they take to the pool at 9:00 a.m. on Tuesday, July 22.  Tennis and Women’s Basketball will see their first action of the games at 8:00 a.m. as they received a bye on the first day of competition.

Spearfishing will depart Mangrove Bay at 8:00 a.m. for their Team event while Fast Pitch Softball continues with Guam vs. Chuuck in the women’s division at 1:00 p.m. and Guam vs. Palau in the men’s division at 3:00 p.m.  Women’s Volleyball team will play at 12 noon against Yap with Men’s Basketball capping off a busy day versus Kosrae at 8:00 p.m.