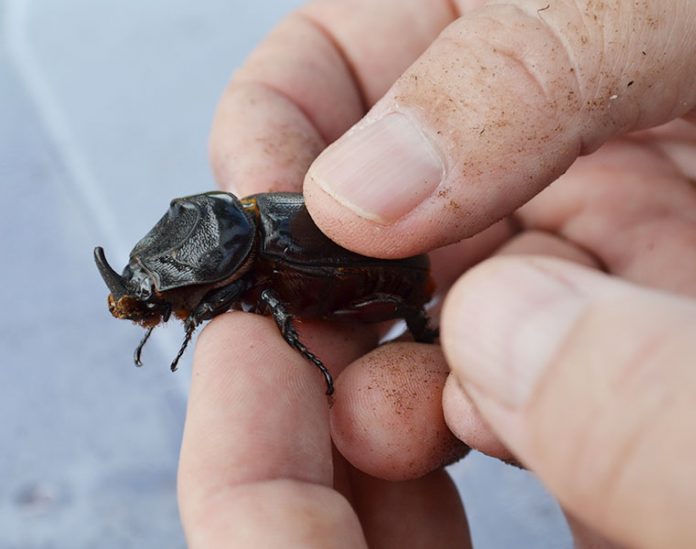 The U.S. Department of the Interior Assistant Secretary, Insular and International Affairs, Douglas W. Domenech today announced $942,206 in fiscal year (FY) 2020 Coral Reef and Natural Resources Initiative grants to eradicate and control the spread of invasive species in the U.S. territories of Guam and the Commonwealth of the Northern Mariana Islands (CNMI), as well as in the Republic of Palau, and Yap, in the Federated States of Micronesia (FSM).

The department says funding will be used to introduce biological control of coconut rhinoceros beetles, control and eradicate feral cats and monitor lizards, and destroy wild vines, all of which are disruptive to ecological systems and impacting communities and livelihoods in the islands.

An initial list of grants awarded under the Coral Reef and Natural Resources Initiative for FY 2020 are as follow:

$239,994 is awarded to the University of Guam to establish biological control of the Coconut Rhinoceros Beetle (CRB) population on Guam using two recently tested Nudivirus (OrNV) isolates (V23B and UOGT) that have proven to be effective in killing the CRB. Funds will be used to 1) survey for the amount of OrNV isolates that may already be actively spreading within the Guam CRB population; 2) release OrNV-infected CRB into the healthy CRB population; and 3) establish an island-wide monitoring system through the use of 150 pheromone traps and roadside surveys that can be conducted using an existing smartphone dash-cam app. The Cycas micronesica, Cocos nucifera, and Heterospathe elata, the three most populous trees on Guam accounting for 39% of the trees in Guam’s forests, are susceptible to the CRB. The Cocos nucifera, commonly known as the coconut tree, has already suffered extensive damage throughout Guam. Continued spread of the CRB will cause further damage to Guam’s forests, leading to land erosion that will impact waterways, corals, and marine life surrounding Guam. There is also the risk of the CRB spreading to other islands in the region. The current outbreak of the CRB on Guam began in 2015 after Typhoon Dolphin left massive amounts of decaying vegetation, creating prime CRB breeding sites in its wake. The CRB was identified by Micronesian leaders during the 22nd Micronesian Islands Forum as an urgent and growing threat to the region.

$222,320 is awarded to the Mariana Islands Nature Alliance (MINA) to control the spread of invasive vines on Saipan in the CNMI. MINA, is a community-based, non-profit organization that has managed coastal and ocean clean-up for the past ten years through a Tasi-Watchprogram. They will use the funds to recruit and train five additional Tasi-Watch rangers to help control the spread of invasive vines in priority watershed areas. Invasive vines on Saipan are smothering native plants and trees, leading to erosion and increased sedimentation in streams and in the ocean. Among the invasive vines identified on Saipan are: Operculina, Ipomoea spp, Cryptostegia grandiflora, Coccinia grandis, Epipremnum aureum, Antigonon leptopus, Passiflora spp, and Mikania scandens. Funds will also support the MINA Schools for Environmental Conservation program where they recruit one teacher and five students from each school to participate in hands-on and in-the-field conservation experiences in the community. Founded in 2010, the Tasi–Watch program has been successful in recruiting recent high school graduates and training them to become community conservation rangers who work to protect the natural environment and share conservation messages in the community with their peers, families, villages, and the wider island population. The word Tasi in Chamorro means ocean.

$239,922 is awarded to Island Conservation to eradicate feral cats in the Ulong Island area of the Rock Islands Southern Lagoon, an important tourist and fishing location in Palau. Island Conservation, a non-profit organization, will work with the Koror Department of Law Enforcement and other agencies to eliminate feral cats and protect seabird populations that help maintain reef health and contribute to terrestrial and marine biodiversity. In 2019, OIA awarded a grant to Island Conservation to support eradication of rat populations from the Ngemelis Island area, also in the Rock Islands. Feral cat removal is a necessary next step to help solidify and achieve full recovery of plant, bird, and marine species, many of which are found nowhere else and are linked directly to food and plant materials that Palauans depend on for livelihood and also serve as a critical attraction for tourists.

$239,970 is awarded to Island Conservation to eradicate invasive monitor lizards and manage an outbreak of Montipora corals which have become a threat to food security in Ulithi Atoll, Yap, FSM. Island Conservation, a non-profit organization working closely with the Ulithi Falalop Community Action Program, Ulithi’s Council of Ten, the Yap State Government, and other partners plan to: 1) eradicate invasive monitor lizards, 2) recover terrestrial resources, and 3) manage an outbreak of Montipora corals. Loosiep Island is a traditional “gardening island” in Ulithi Atoll, where food is grown and shared among islands within the atoll community. However, large monitor lizards have become a threat at Loosiep, preventing people from agricultural activities, thereby threatening the food supply and people’s livelihood. These voracious reptiles also consume sea turtle eggs, seabird eggs, invertebrates, and land crabs, thereby disrupting sea-turtle life cycles, eliminating seabird nutrient subsidies for land and coral reef ecosystems, and inhibiting important nutrient cycling performed by land crabs. The group will also monitor and manage an outbreak of Montipora corals believed to be linked to ecological imbalances. This FY 2020 grant award will supplement OIA funding announced in 2018 which was used to successfully eliminate invasive rats in Ulithi Atoll.

“Secretary Bernhardt and I are pleased to provide this funding to destroy invasive species that are disruptive to people’s livelihood, food supplies, and natural eco-systems,” said Assistant Secretary Domenech.

“We appreciate Congress for making these opportunities possible through annual appropriations and are also happy to announce these grant awards during the 2020 National Invasive Species Awareness Week to help increase awareness about invasive species in the islands.”

For more on coordination within the Department of the Interior on invasive species management, visit https://www.doi.gov/ppa/office-of-policy-analysis-invasive-species-coordination.