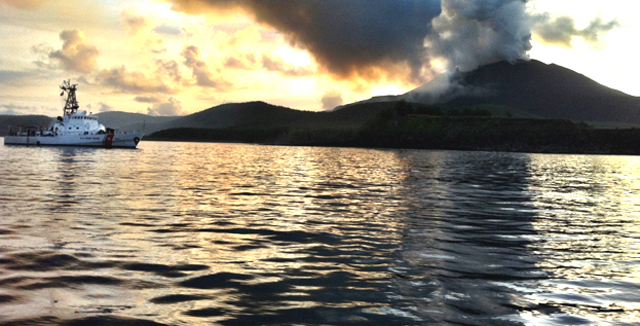 While underway the cutter patrolled the western-most area of the exclusive economic zone extending 200 nautical miles west of Commonwealth of the Northern Mariana’s Island chain, ensuring no foreign fishing vessels were fishing within waters of the United States and that all U.S. fishing vessels were doing so in accordance with the United States’ applicable maritime laws. This area has proven to be a very important enforcement zone due to its remoteness, vast size and relative proximity to foreign nations in the Far East. Enforcement of such a vast and remote area, which is vital in protecting U.S. fisheries economy.

Additionally, during its transit north, the cutter transported supplies to the Pagan Installation Project, which consists of a joint partnership with the Army Corps of Engineers, U.S. Geological Survey, National Oceanic and Atmospheric Administration, and the Commonwealth of the Northern Mariana Islands government.  The project, which is being done on the remote island of Pagan in the northern part of the CNMI chain, is being done to install seismic sensors, monitoring stations, and seismic cables in an effort to monitor volcanic activity. To facilitate their efforts, Assateague crewmembers met with project managers in Saipan to pick up 700 pounds of five gallon water jugs, 1,200 pounds of cement bags, tents and camping supplies and various sized batteries, which were all then transported to Pagan.  These items were greatly needed due to the sheer isolation and remoteness of Pagan, which houses only seven permanent residents and is 170 miles north of Saipan, the closest inhabited island with modern amenities.

“It was great being able to get out there and ensure fishing vessels, foreign and domestic, are obeying the laws dictated within our exclusive economic zone and on the high seas,” said Lt. Jared Silverman, commanding officer of the Coast Guard Cutter Assateague. “Along with that, we were glad to play a small part in helping facilitate the project in Pagan and strengthen bonds with our inter-agency partnerships at the same time.”

The Assateague is a 110-foot Island-Class patrol boat. Its assigned missions include search and rescue, maritime law enforcement, ports waterways and coastal security and national defense. The Assateague has an area of responsibility equivalent to the size of the continental United States.

The aging 110-foor patrol boats are scheduled to be replaced by the new Fast Response Cutters, which through its size and advanced technology is able to make longer patrols and cruise at faster speeds. The Sentinel-class Fast Response Cutter is a new class of ships featuring an array of new technologies, communications systems and living quarters for the crew. Four of these ships are already in use in Miami.