SANTA RITA, Guam (Dec. 4, 2013) — Sailors from Explosive Ordnance Disposal Mobile Unit (EODMU) 5 partnered with  members of the Republic of Singapore Navy (RSN) for the bi-annual Miata Exercise that kicked off at U.S. Naval Base Guam Dec. 3.

The joint training builds interoperability between the two EOD groups who have a continued working agreement. The exercise will continue through Dec. 14.

“This is something we enjoy doing and it enhances our ability to develop and integrate our EOD (Explosive Ordnance Disposal) techniques,” said Lt. j.g. Joseph Lynch, EODMU-5. “They’re a very reputable force with extremely well-developed capabilities. We hope to exchange our ideas and information so we can see how they operate, and hopefully integrate some of their tactics into our future operations.”

With the robotics training, EODMU-5 practiced using RSN’s PackBot to investigate a bag with a potential threat, while RNS members used EODMU-5’s Talon Mark II to maneuver around an obstacle and to pick up and transport batteries into a container.

Since these movements were done through remote controls, it promoted the use of precise movements and decision-making. These robots help minimize the danger to EOD technicians by allowing them to identify and handle ordnance at a distance.

EOD 3rd Class Jacob Trefney said he was glad to work with the RSN and learn from their counterparts as it strengthens the relationship between the two nations.

“It’s definitely an awesome opportunity for everyone involved,” he said. “We can see each other run drills, see each other’s equipment, how they use their equipment and the different adaptions that they’ve added.” 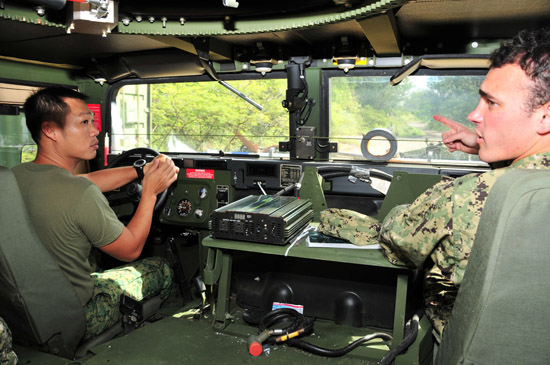 During the Miata Exercise, EODMU-5 and RSN plan to perform render safe procedures, respond to a simulated threat aboard ship and conduct other trainings at various sites that will help round out their knowledge of explosives handling and response. 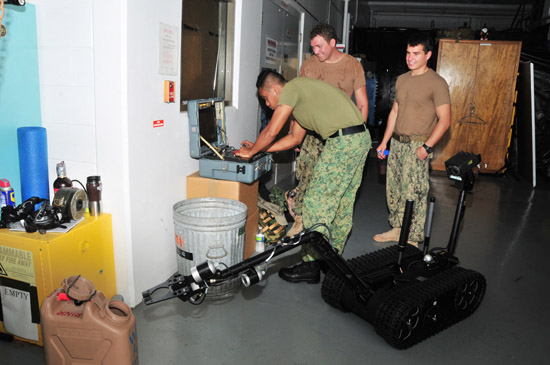