Over 30 participated in Guam Football Association’s first ever beach soccer course with visiting instructor Hilal from Oman, the sole FIFA Beach Soccer coaching instructor from Asia. Participants also included a few visitors from the Philippines and Saipan for the five-day course held at GFA.

“It is my task in Guam through the course to help improve knowledge of the game, and I hope that with the conclusion of the course, Guam’s athletes will see the sport differently and start to participate at higher levels,” Hilal said. “I hope that Guam will soon have a national team to compete in tournaments like the Asian Beach Games, or other tournaments – there are so many championships in Europe and Asia.”

Hilal began his journey in beach soccer in Oman playing the sport recreationally with friends. As a former national team defender for the Oman national team for 15 years and through his involvement in national-level coaching with the Oman Football Association, he was selected to build up the country’s beach soccer program in 2008. In 2008, under Hilal’s coaching, the Oman national beach soccer team won the 2008 Asian Games, and later, were runners up in the 2011 FIFA Beach Soccer World Cup qualification rounds for AFC, qualifying for the World Cup. The team also has received a long list of gold and silver finishes from regional tournaments, Hilal said. Hilal added FIFA Beach Soccer Coaching Instructor to his resume in 2009, and has conducted courses in Uganda twice, Yemen, Ghana and now Guam.

“I enjoyed of course the practical sessions,” said course participant Anjelica Perez, who also co-captained the Masakåda, the Guam women’s national team, last year. “The drills were especially challenging – even for good players on 11-a-side, the drills were challenging. 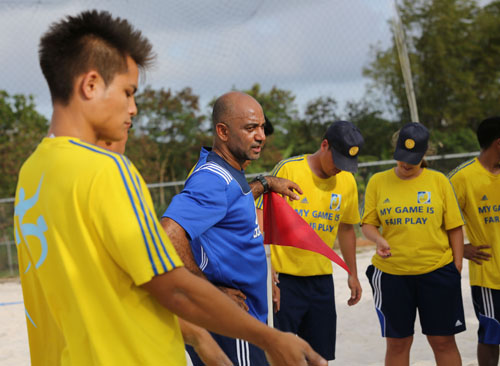 “You’re playing on an uneven surface and you feel heavier on the court since you are constantly sinking in the sand. Learning timing of the ball on passes was also a good challenge,” added Perez, who is in Guam for summer break after graduating from St. Martin’s University in Washington with a degree in Biology.

The FIFA Beach Soccer Course concluded Monday with a closing ceremony at Samurai Restaurant, where course participants were treated to dinner and received FIFA certificates acknowledging their participation in the FIFA level course. 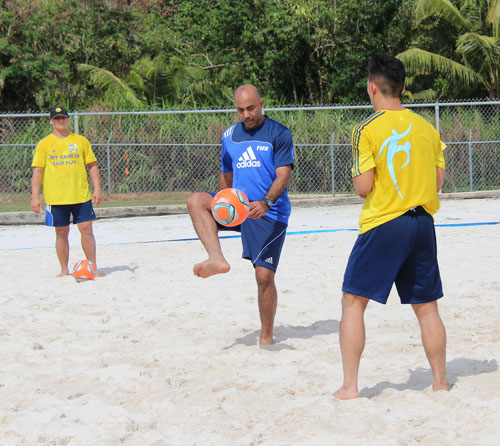