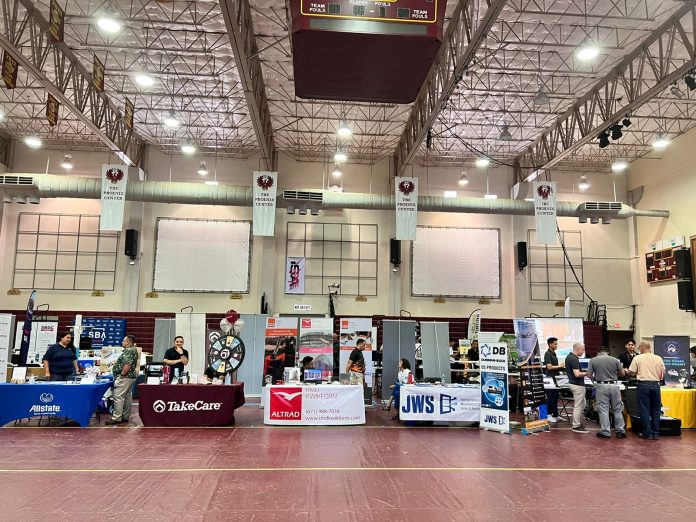 After a short break due to the pandemic, the Guam Contractors Association kicked off the first day of its industry trade fair and expo.

The fair, which will host a second day tomorrow, was free and open to the public and featured various trade industry exhibitors showcasing their equipment, tools, products, and services.

PNC spoke with the president of GCA, James Martinez, who explained what the two-day affair aims to establish.

He said, “The expo is a chance for our local suppliers– both the material and equipment suppliers and actually, any business that provides a service to the industry to showcase what they have here.”

Among those who attended the fair and expo were Career Tech Academy Charter School students, who, according to Martinez, expressed great interest in the event as the school equips its students for technical careers, like construction. When asking four students at the event about their experience, they said that the fair and expo were beneficial to helping pave their future career paths.

President Martinez said, “What I told them was right now, we’ve got projects that are ongoing. We have an immediate need for construction trades: carpentry, plumbing, welding, masonry, and the like– but the real, sustainable jobs, the jobs after that’s the long term.”

Martinez said that true sustainability lies within the maintenance jobs, especially in light of the military build-up.

He said, “What it does is that it prepares a lot of the vendors that are coming to Guam, knowing that we do supply equipment out here and we do have– we can provide the services from heavy construction equipment to ariel platforms, to forklifts, and material handling equipment, so it all varies. But, at the same time, I think there is enough business to go around, as there are so many construction companies going on today and all the construction build up to as well.”

Interested individuals may attend the second day of the fair and expo tomorrow, from 9 AM- 3 PM, at the Father Duenas Phoneix Center.