Guam – The age-old adage that anything is possible if you put your mind to it holds true for former Guam resident Jason Espiritu and his wife, Jessica Borrego, who just recently finished their first-ever 26.2-mile run at the 2012 Bank of America Chicago Marathon over the weekend.

“The final moments of the race were some of the most emotional that I had ever experienced in my entire life thus far,” Espiritu said via E-mail from Chicago. “Once I saw the ‘1-Mile (left to go)’ sign, this wave of emotion came over me.

This was the moment that I had been visualizing for the better part of six months and it was just so near. My heart started racing and my pace started to quicken.

I kept looking straight ahead to a Jumbotron, thinking that was the end, but there was just one more turn and 400 uphill meters … Finally I saw the finish line, with cheering crowds and loud music. I kept running faster, kept lengthening my strides and kept fighting back tears. As I crossed, my natural reaction was to raise my arms and

Bee representing Guam when he attended St. Anthony Catholic School. Espiritu is credited as the island’s first-ever national finalist in the Geography Bee when he finished in 8th place in 1998. He also was briefly shown on ESPN during the sports network’s annual feature on National Spelling Bee finalists when he finished tied for 9th place nationally in 1999.

Espiritu and his wife, Chicago residents, ultimately decided to train for the marathon following a 5K they ran in late 2011. Espiritu said the couple was “interested in committing to something that would challenge us not only physically, but also mentally and emotionally.” The couple also used the marathon as a way to lose weight, build self-confidence and make a positive lifestyle change, Espiritu said. 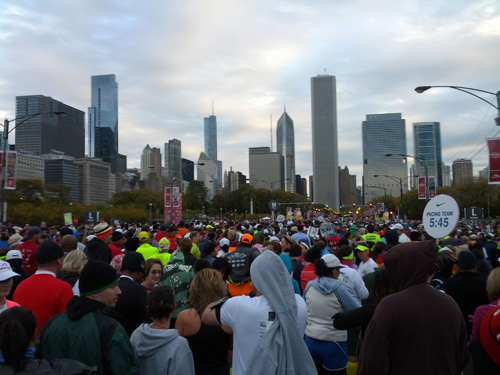 The couple’s training regimen included those outlined in the Hal Higdon Novice Supreme Training program, a program for people interested in distance running but with no prior experience. The program runs for 30 weeks total, broken up into 12 weeks of pre-training, followed by 18 weeks of actual training. In addition to sticking with the program outline, the couple also met up with others who had trained for and ran previous marathons or were registered for the same race and exchanged training tips and advice.

“This support was crucial to building confidence during the 30-week training program and developing strategies for the race,” Espiritu said.

The night before the morning race, Espiritu ate pancakes and scrambled egg whites with ham. About one hour before the race, he ate multi-grain bread with peanut butter and chia seeds soaked in water for a few minutes to form a paste, he said.

Espiritu’s goal for himself was to finish under five-and-a-half hours, which he met. His official finishing time was 5 hours, 28 minutes and 7 seconds, finishing the first half of the race in 2 hours, 58 minutes and 37 seconds, besting over thousands of other finishers.

Also running the race were other former Guam residents, including Salvador Mutuc, a 1997 graduate of John F. Kennedy High School. For Mutuc, the Chicago Marathon is only one of a handful of distance races he will finish this year to support the charity Hope for Gavin. The charity is committed to find a cure and spread awareness of Tay-Sachs disease, according to the charity’s Web site. Mutuc’s journey details and fundraising Web page can be found at hopeforgavin.com/events/miles-of-madness-for-tsd-awareness

“Join me and Hope for Gavin as I race through the San Francisco Marathon, Malibu Creek Ultra Trail Run, the Chicago Marathon, Bike the Coast San Diego 2012 and the North Face Gortex 50 mile Ultra Marathon San Francisco by the end of this 2012,” Mutuc says on the Web page. “Please help my fundraising page. I will match your generous donation with mileage and gratification.”

For complete 2012 Bank of America Chicago Marathon results and information, log on to www.chicagomarathon.com.