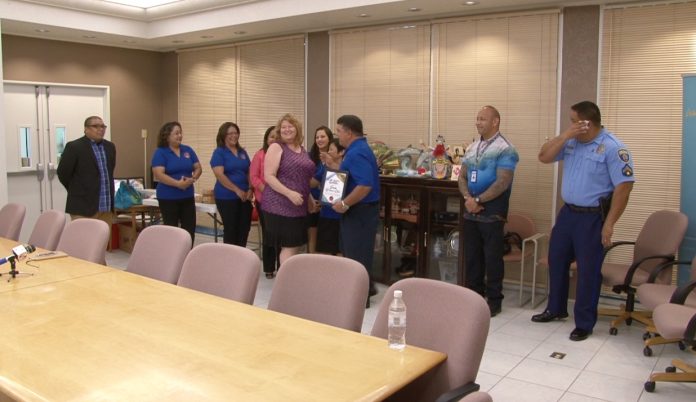 The ceremony was held at the Guam Visitor Bureau.

Guam – Today, on the 30th anniversary of Guam crime stoppers, the non-profit crime-fighting group took a moment to thank its supporters. Members of the community, media and even the government showed up to receive awards. The event was hosted by Guam crime stoppers board member Kyle Mandapat as well as other members of the group. Senator Brant McCreadie, Police Chief J.I. Cruz and the familiar face of Guam Crimestoppers, officer Paul Tapao were also in attendance.

“As Kyle had mentioned, a lot of the information that comes to the Guam police department comes from the crime stoppers program. We get this information and we work on it and some of them come to fruition and we solve a lot of the crimes that are in the community and we appreciate it and we couldn’t do it by ourselves, its a collaborative effort,” said Cruz.

“I’d like to thank of course Chief Cruz and Lt. Torre for allowing me the opportunity to work for you great people. If it wasn’t for you guys, reaching out wanting to help, making this happen, we’ve been successful for the last three years, thank you for your support and we look forward to your continued support, whether it be through radio or the news,” said Officer Tapao.

At the meeting, Chief J.I. Cruz thanked Lt. Mark Torre, who was recently put in charge of GPD’s auxiliary services division, of which Guam Crimestoppers falls directly under.