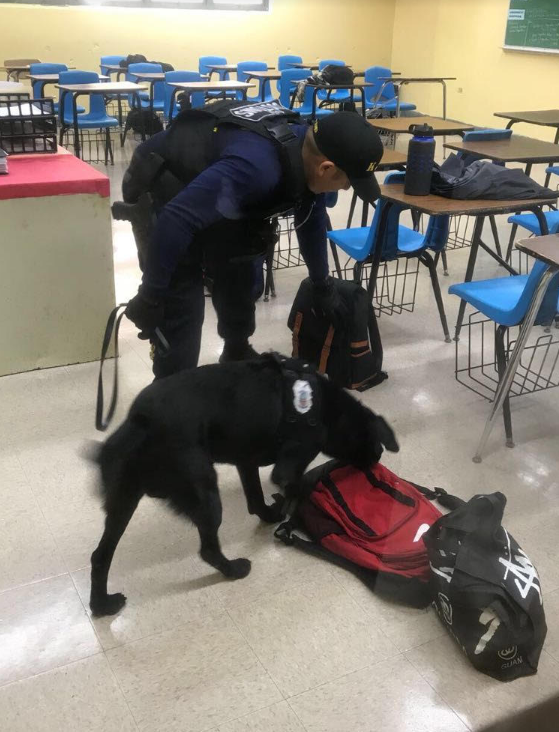 Guam – Guam Customs and Quarantine will bid farewell to one of their own, a four legged Custom’s officer responsible for thwarting $13,000,000.00 worth of drugs from entering the island.

After serving the island for two years as a Guam Customs and Quarantine Drug Detection Dog, K9 Tony will be hanging his leash up for medical reasons. Acting Customs Director George Charfauros was on K57’s mornings with Patti Arroyo Show two weeks ago to give the four legged officer the recognition he deserves.

“I was informed that they are retiring, medically retiring the dog. The dog has been in service for a couple of years but is no longer able to do what he was trained,” shared Charfauros.

According to a release from Customs, Tony was brought to a local veterinary clinic to be seen for a chronic cough when it was discovered that his left laryngeal cartilages had decreased mobility. Custom’s PIO Jessi Santos-Torres stated, quote “X-ray scans also confirmed that DD Tony suffers from Tracheal Collapse which is not a surgically correctable problem. The combination of these two diagnoses caused the veterinarian to recommend the Agency retire DD Tony.”

“I am not sure how the dog got that way certainly can’t rule out the hazards of what he was doing,” stated Charfauros.

While it is not know what caused his medical issues, it is hopeful that he will send the rest of his days spoiled and pampered for all his hard work. Tony’s service as a detector dog include:

A retirement ceremony was held at the Customs headquarters in Tiyan.

“We want to give back to DD Tony by honoring his contributions to our community with this retirement ceremony so that he may live out the rest of his days amongst a loving family and in comfort,” expressed the Acting Director.