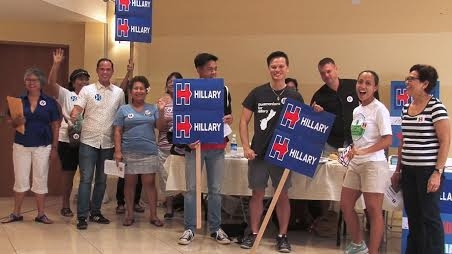 Guam – The Democratic Party of Guam picked Hillary Clinton as their favorite for president during a caucus held over the weekend to select delegates for the Democratic National Convention.

While residents of Guam are unable to vote for president both the Republican and Democratic parties do have a say about who their party picks to run for president. Based on Saturday’s vote Clinton won by getting 59.57 percent of the vote to Senator Bernie Sanders 40.45 percent. This means that 4 delegates will be pledged to Secretary Clinton while 3 delegates will be pledged to Senator Sanders. On top of this Guam also has five super delegates. Super delegates can vote for whoever they like regardless of how the people of their district voted. Guam’s five super delegates are Democratic Party Chairman Kin Perez, Vice-Chair Sarah Thomas Nededog, Congresswoman Madeleine Bordallo, National Committeeman Rory Respicio and National Committeewoman Sarah Thomas Nededog. “I’m really excited about supporting the next president of the United States I think Hillary is a really great friend of Guam. She’s been here, she understands our issues. You know it’s a really personal thing for me and my family so I’m really proud to support somebody who champions veterans issues, issues for families she’s been a strong supporter for war claims and a balanced realignment in the Pacific so I know that she’s gonna be really really great as president and I’m very proud to support her,” said Regine Biscoe Lee.

Perez and Nededog both pledged their support to Hillary Clinton after Saturday’s vote showed the Guam party members favored the Secretary of State. Final identification of the individual delegates will be determined upon application of diversity factors and certification by the central executive committee.