Guam –  The Guam Department of Education (“GDOE”) has released the official school enrollment for school year 2013-2014 with a total count of 31,593 students.

While the total student count is slightly down from last year, the public school numbers have shown a steady upward trend over a five year period with an increase of more than 900 students between school year 2009-2010 and 2013-2014 (Figure 1).

Reviewing data over time will enable GDOE to look at trends and determine what course(s) of action are needed to promote student success. “If we have one data point with nothing to compare it to, it is difficult to see what the bigger picture is,” said Fernandez. “When we talk about reassigning attendance areas or shifting students here or there, it is critical that we look at the entire picture.”

While those figures vary by 245 students, Fernandez acknowledges that GDOE included the pre-kindergarten students (126) in this year’s calculation. “When we crunch the numbers, we see that GDOE has welcomed a total of 119 new students to our public schools,” said Fernandez. “However, we are required by law to release funding for 515 students to attend the charter school.”

The largest increases in enrollment over the five year period have come at the elementary and high school levels with increases of 422 and 440 respectively (Figure 2). 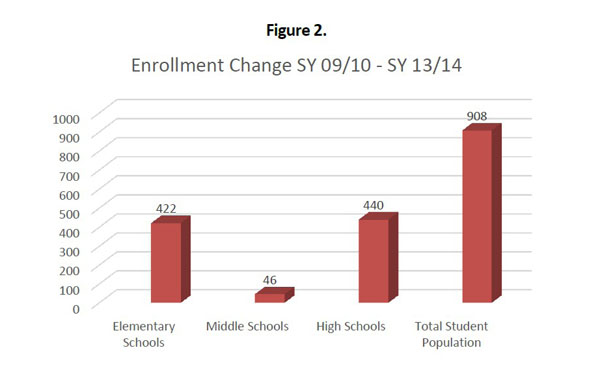 Five elementary schools, one middle school and one high school have seen significant increases during the five year period with John F. Kennedy High School’s enrollment going up by 600 students. Less than half of the elementary schools (11), three middle schools and three high schools had decreases in enrollment during that same period (Figure 3). 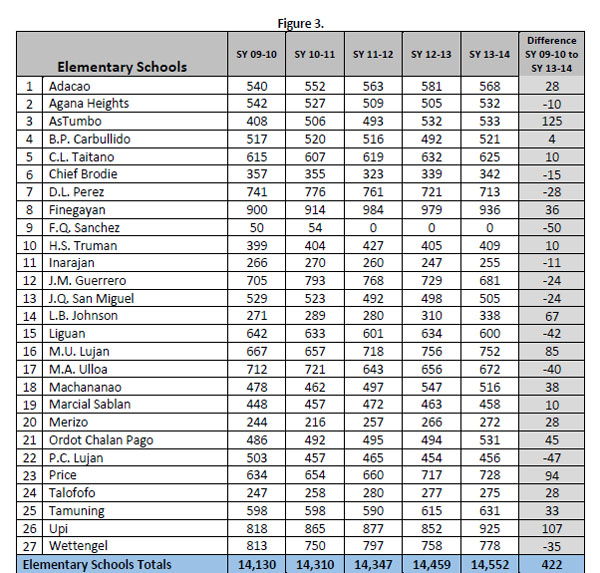 Reviewing data that impacts the learning environment, like enrollment data, is a starting point. Additional consideration to achievement, attendance, discipline and participation in the school lunch program must also be thoroughly reviewed and analyzed. “There are several factors that impact the success rate of our students,” said Fernandez. ““I want to ensure that we are providing our students with the best opportunity to be successful, and living up to that commitment.”