Guam – Guam’s team had a dominant outing in both the U12 and U17 All-Girls divisions on opening day of the 2013 Pacific Summer Invitational against their counterparts from the Philippines at the Guam Football Association National Training Center.

In the U17 All-Girls division, Quality Distributors FC 1 defeated their Southville International School opponents 9-1, led by Raven Aguon’s hat trick. Teammates Philana Lopez and Hopemary Calip each scored twice. Franshay Shippey and Sabrina Wiegand also added to Quality’s tally. Quality led by as much as 8-0 before Southville earned its lone goal in the 45th minute from Kayla Ito.

It was a similar result in the U12 division, with the Wolverines outplaying their visiting Southville opponents 7-1. Shaun Paul Martinez led the Wolverines’ charge with a hat trick and teammate Brianne Leon Guerrero added a brace, with one of her goals coming off of a header in front of and over Southville goalkeeper Jose Luis De Luzariaga. James John Crisostomo and Noah Tainatongo also scored one each for the winning team. Southville’s Yuban Fujiwara scored his team’s lone goal.

Guam didn’t fare as well in the U14 division of the tournament as the Rizal Football Association (RIFA) U14 team defeated Community First Dededo Soccer Club 6-0. The RIFA team, composed of students from various schools in Manila, led 3-0 at halftime behind a hat trick from Teddy Travis.

RIFA got on board in the second half on a shot by Mateo Alegre into the left corner of the goal that Community First goalkeeper Ivan Joshua F. Galutira tried to stop with leg. Later, a goal from Jan Japheth Lico to the right post put RIFA up 5-0. Troy Sy iced RIFA’s win with a successful penalty kick to the right corner of the goal. 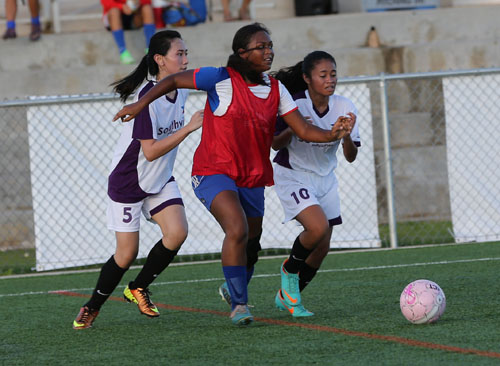 [Quality Distributors FC 1’s Franshay Shippey (in red) looks to pass the ball to a teammate as Southville International School’s Lorraine Otake (5) and Kayla Ito (10) pressure her on defense during an opening day match in the U17 All-Girls division of the 2013 Pacific Summer Invitational Football Tournament
at the Guam Football Association National Training Center. Quality defeated Southville 9-1.]

In the day’s other U14 division match, the Wings FC defeated Quality Distributors FC 6-0 behind a pair of goals each by Jordan Jasmin and Sean Evans. Inochi Recella and Takumi Ito also scored for the winning team. 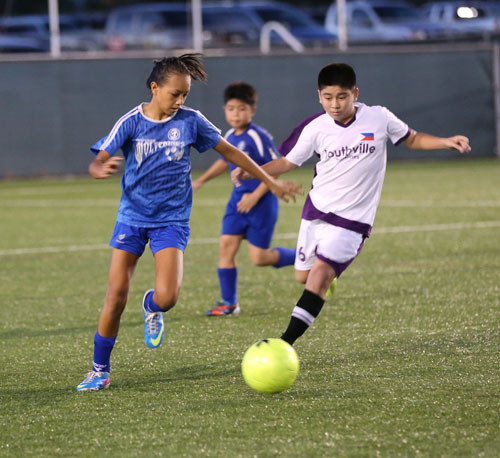 [The Wolverines’ Brianne Leon Guerrero turns toward the goal as Southville International School’s Yuban Fujiwara puts pressure on her defensively during an opening day match in the U12 division of the 2013 Pacific Summer Invitational Football Tournament at the Guam Football Association National Training Center. The Wolverines defeated Southville 7-1.]

In the early U12 division game, Shawn Sablan scored five goals to lead the ASC Islanders to a 6-4 win over the Tigers. Gabriel Tan scored the Islanders’ other goal. Luke Kim and Seung Kim each scored twice for the Tigers.

Round robin action continues Saturday, with the tournament playoffs scheduled for Sunday.

Admission is free to watch the game